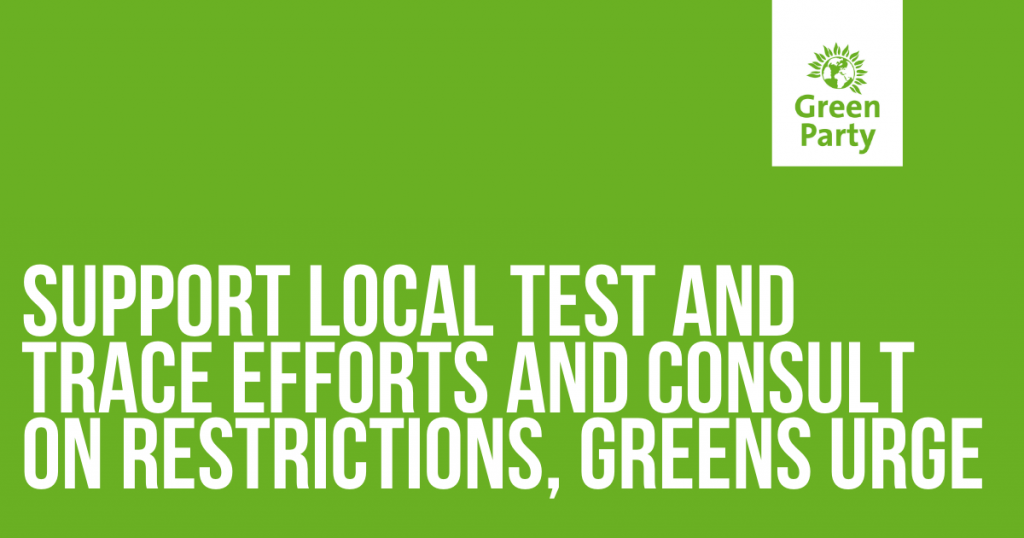 Proposals put by Green Councillors to a council meeting this evening, will see the council writing to Conservative ministers to request ‘urgent action to address the failings in the national test and trace system’.

Pointing to the knowledge and expertise of local public health teams, Greens have repeated previous calls for more resources to be given to local public health teams to conduct test and trace services where the national scheme has failed. Figures show national contact tracing teams reached only 64.3% of cases in the week ending 23 September, while local teams reached 97.6% of the cases they handled.

Councillors will also debate a request to government for a report into the effects of lockdown on the quality of life after early research suggest several substantial impacts. These include increased calls to domestic abuse helplines, rising anxiety and mental health challenges among many and worries around job loss and financial problems.

Greens say it is vital that the government now undertakes a serious review of the support that particular services – including mental health – may need to reach an increasing number of people negatively affected by restrictions.

Following previous Green calls for a ‘Green New Deal’ in the city in October last year, Green councillors suggest that the economic challenges facing jobs and livelihoods could also be tackled in the upcoming spending review by introducing a genuine, country-wide programme for investment in jobs and skills that tackle both the climate and health crisis.

“Private companies have repeatedly failed to meet their targets to identify people with the virus and scandalously wasted hundreds of millions of pounds of public money.

“The funding instead needs to be urgently handed over to local council public health teams who have provided exceptional expertise throughout the pandemic, despite a decade of savage government cuts.”

“It is already clear that the pandemic has had huge impacts on our quality of life and the power to tackle this is in government’s hands. There will be services now that we can anticipate will need ever increasing support in the future as many people navigate their way through this crisis.

“We call on the government to recognise, research, communicate and address the long term impacts of the pandemic and lockdown by providing additional and easy to access publicly funded support services. There are also ways through this crisis that can be positive, which is also why we continue to call on the government to introduce a wide-ranging plan for jobs and wellbeing – a Green New Deal – to ensure we tackle the impact of Covid-19 and the climate crisis as we recover.”