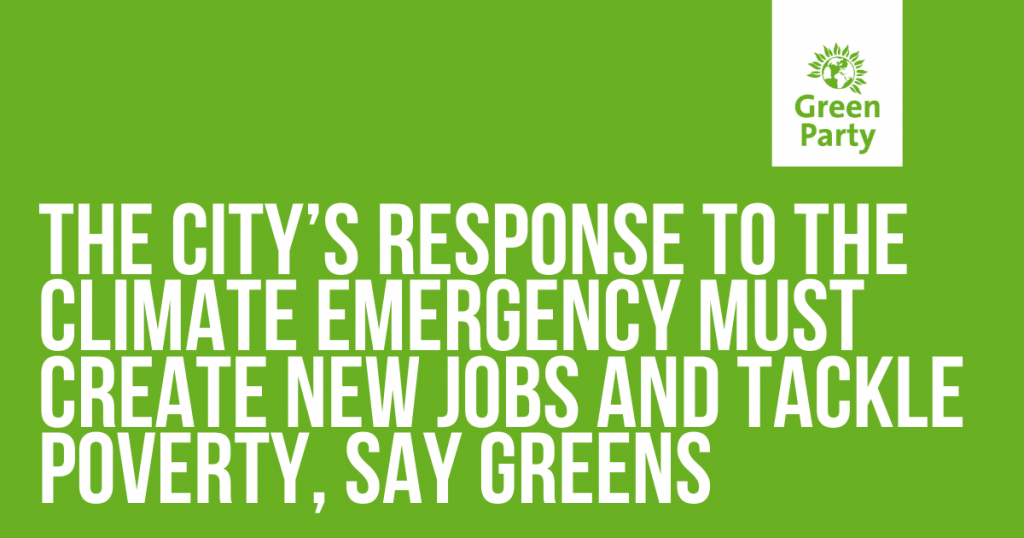 Push for a ‘Green New Deal’ for Brighton and Hove

The city’s response to the climate crisis could help to combat poverty and create new jobs, Greens have said today, calling on the council to adopt a ‘Green New Deal.’

Brighton and Hove City Council has declared a ‘climate and biodiversity emergency,’ and agreed last December to commit to reducing carbon emissions to ‘net zero,’ by 2030.

A proposal going to a meeting of full council today, (October 24th) will put forward plans for a ‘Green New Deal,’ for the city, that looks at how plans to reduce carbon emissions can also create new jobs and better opportunities for people in Brighton and Hove.

Calling for positive change, Greens say the climate emergency can be addressed in ways that simultaneously tackle problems of poverty, inequality and accessibility, such as through minimising fuel poverty and boosting opportunities in ‘low carbon’ industries – including public transport and renewable energy.

Greens also want the council to write to Secretary of State for Work and Pensions, urging the Government to support a national Green New Deal, so that issues of social inequality and poverty become central to nationwide plans to reduce carbon emissions.

Work on a ‘Green New Deal,’ has been underway for several years, with Green MP Caroline Lucas co-founding the UK’s Green New Deal group in 2008.

Councillor Amy Heley, who will put forward the proposals, commented:

“The Green New Deal is a not a new idea – but it is desperately needed. If we don’t act now the climate crisis will be a catastrophe. But we can be bold in the way we respond and use this opportunity to drastically improve quality of life.

“Brighton and Hove City Council has a key role to play in promoting investment in both people and planet. We must seize the chance to address poverty and inequality – through steps such as insulating homes to prevent fuel poverty. We can benefit our health – by improvements to air quality that also address the climate emergency. Working with partners across all sectors, there is an opportunity to boost jobs that play a direct role in our transition to a carbon neutral city.

“It is vital we work with partners to assess how our own commitment to addressing the climate emergency can improve social justice and job creation, as we enter the 10-year process of reaching net zero by 2030. Our response to the climate crisis can also be a positive one.”

“We now face the collapse of the environment, of biodiversity, habitats and species extinction – crises that demand a large scale response. To reverse the decline of our natural environment it’s clear that there is a need for major reform – but the reform we need is in fact well overdue: looking at a system that can prioritise people and our environment instead of focusing on profit and plundering natural resources.

“The council can play a major role in this transition. We urgently need to look at ways we can move away from using fossil fuels and the practices of industries with high carbon use. Businesses must also be encouraged to get on board, in ways that protect, enhance and offer new jobs. It is positive that work towards carbon neutrality and developing a ‘circular economy,’ that reduces waste, for example, is already underway.

“On top of this, our call for a Green New Deal asks the council to demonstrate good practice as a major employer – by continuing to develop ‘net zero’ initiatives and employment opportunities, setting an example in our own buildings and employment practices.

“Changes that support our environment can also support our residents – for example, work to help people insulate their homes, or develop district heat networks from renewable energy sources, can ensure we make the transition away from costly fossil fuel based energy and address fuel poverty.

“At this stage we are asking the council to explore what can be done and to commit to working with partners across the city. There is so much to be gained by ensuring environmental change and social justice go hand in hand. We can innovate in ways and at a scale that we have never been able to before, to benefit everyone.”