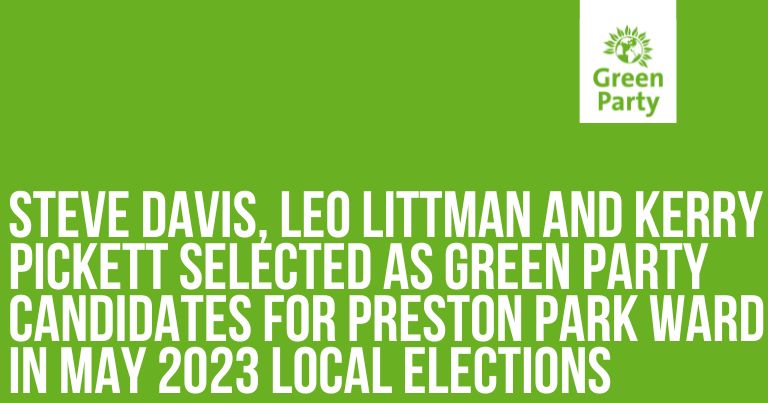 Brighton and Hove Green Party has selected three candidates for the new Preston Park ward in the upcoming local council elections in May 2023.

The party hopes the new ward, which consists of parts of the current Preston Park and Withdean Wards, will re-elect councillors Steve Davis (Withdean) and Leo Littman (Preston Park). This is alongside new candidate Kerry Pickett, who is an active member of the community and part of the Friends of Preston Park Committee.

“Having represented the existing Preston Park ward since 2011, I’m delighted to put myself forward to continue representing communities in Prestonville and around the park itself. I’m also hoping to have the chance to represent areas new to me around Preston village, Preston Park station, and the Surrenden and Varndean area.”

“I firmly believe that Kerry, Steve, and I make a great team and will work hard on behalf of our residents and the city as a whole.”

“As your ward councillor I am always here for you. I have a passion for this community and can use my knowledge and relationships within the Council to bring quick resolution to your problems and make the future of our community a priority.”

Standing for election for the first time, Kerry Pickett said:

“The Green Party is the only party that I believe will bring about a sustainable economy; attempting to do things differently whilst bringing about positive change in an equitable way that benefits everyone, not just those who can afford it.”