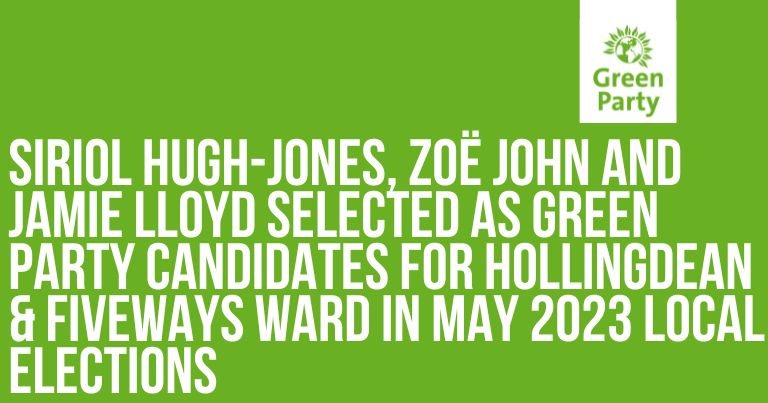 Brighton and Hove Green Party has selected three candidates for the new Hollingdean & Fiveways ward in the upcoming local council elections in May 2023.

“It was a great privilege to have been elected in 2021 in the snap by-election. It has been incredibly productive both at ward level and through my roles at the council. Particularly as a parent of young children, I am on the front line of issues that can impact families and I am dedicated to making life better for us all. I believe it is vital that politics represents real people.
“Alongside Siriol and Jamie we will work hard together making sure that residents’ voices are heard and understood and requests are actioned to make a better city for all.

“I am honoured to have been selected to represent the area that has been my home since 2007. In response to the cost of living pressures our residents are facing I will prioritise their health and wellbeing by making their homes more energy efficient and improving their access to the green spaces of our beautiful downlands.”

“Since being elected as a councillor in 2019 I have been very active in my community delivering on our key policies such as safer school streets and overseeing the rewilding of Waterhall. I am a proactive councillor and I like to meet residents and get stuck into local issues, Hollingdean and Fiveways is a vibrant and exciting community and I am honoured to be selected as a candidate for this fantastic community.