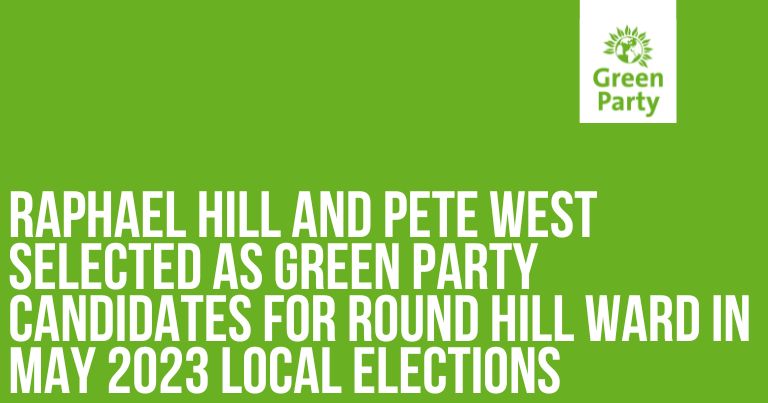 Brighton and Hove Green Party has selected Councillor Pete West and Raphael Hill as candidates for the new Round Hill ward in the upcoming local council elections in May 2023.

Councillor Pete West was the first Green councillor in Brighton and Hove. He is restanding for his 7th term. Alongside his role as a councillor, he is CEO of a successful local wood recycling charity which is pioneering the transformation to a circular economy.

Raphael Hill, who uses she/they pronouns, lives nearby in Brighton and works at a local university. They previously stood in Goldsmid ward in the 2019 local election and are the former International Secretary for the Young Greens of England and Wales.

“I’m honoured to have been reselected as Green candidate for the area I have loved to serve for the past 26 years. Being at the heart of the city, Round Hill is not without its pressures as well as great opportunities. I thrive on helping people succeed and make a difference.

“We know more needs to be done to help households reduce their carbon footprint. As a Green I’m keen that we start to enable neighbourhoods to strive to become Zero Waste Communities: working together to save money and the planet’s resources.”

“I’m honoured to have been selected for Brighton and Hove Green Party and look forward to serving the people of my ward and of the city if elected.

“I want to focus on supporting residents with the ongoing cost of living crisis caused by the current Conservative government. I want to ensure that we provide services to the people who will be most affected.

As someone who experienced domestic abuse growing up, I want to ensure that support services for this are well funded. I’m autistic and passionate about ensuring the inclusion of people like myself and other disabled people in politics.”