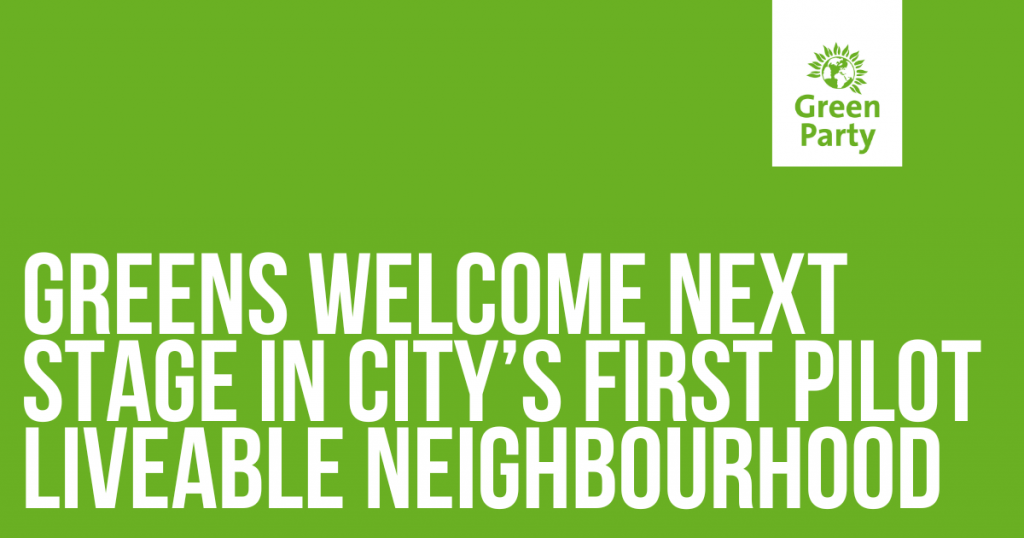 Greens are celebrating agreement to progress to the next stage of the Hanover and Tarner liveable neighbourhood project.

Green Councillors are very pleased that the city’s first liveable neighbourhood in Hanover & Tarner has moved a step forward, following agreement at the Environment, Transport and Sustainability Committee on Tuesday 21st June.

The committee back the Green administration’s plans to progress the project through a two-month public consultation. Residents will be able to comment on outline plans, which were drawn up by external experts based on feedback from previous engagement with residents and other stakeholders including schools and emergency services. The consultation begins on 11 July and gives local people a further chance to give their views and help make the pilot scheme the best it can be for the people who live there. A series of engagement events will take place, the first of which is at the Phoenix Art Space on 19 July between 1pm and 5pm.

Engagement with residents has been taking place since 2020, giving local people the opportunity to be involved in all stages of the project. Ongoing meetings have been taking place with local communities who live on boundary roads of the scheme to identify ways in which these roads can be improved and made safer. Plans now include measures to make these roads safer and greener. Air quality is being measured on these roads with an aim to reduce traffic there too.

“This is a key project, not only for our ward but as part of the push to decarbonise our city. We must act to reduce motorised traffic, as a major contributor to poor air quality and climate change.

“Residents in the liveable neighbourhood area will enjoy safer, more pleasant streets. A well-designed liveable neighbourhood scheme will stop outside traffic from cutting through our area and speeding down our narrow streets, preventing so called ‘rat runs’. The improved environment should encourage more people to leave their cars at home and to walk, wheel, cycle and take public transport. This will reduce the danger from cars and create a more pleasant urban realm for those who live and work in the area.

“The council’s plan is open to change based on feedback from residents and we want to ensure that as many people as possible take part in further stages of the consultation.

“As a gateway into the city, we’re looking forward to seeing major improvements to Elm Grove, such as crossings, more trees and greening. We’re already working with residents on what this will look like. We’re also planning to stop the pavement parking that currently blights the road, improving safety. Alongside Elm Grove, we want improve Queen’s Park Road and the other boundary roads. We’re hoping for a scheme that creates a better environment for everyone living in the area.”