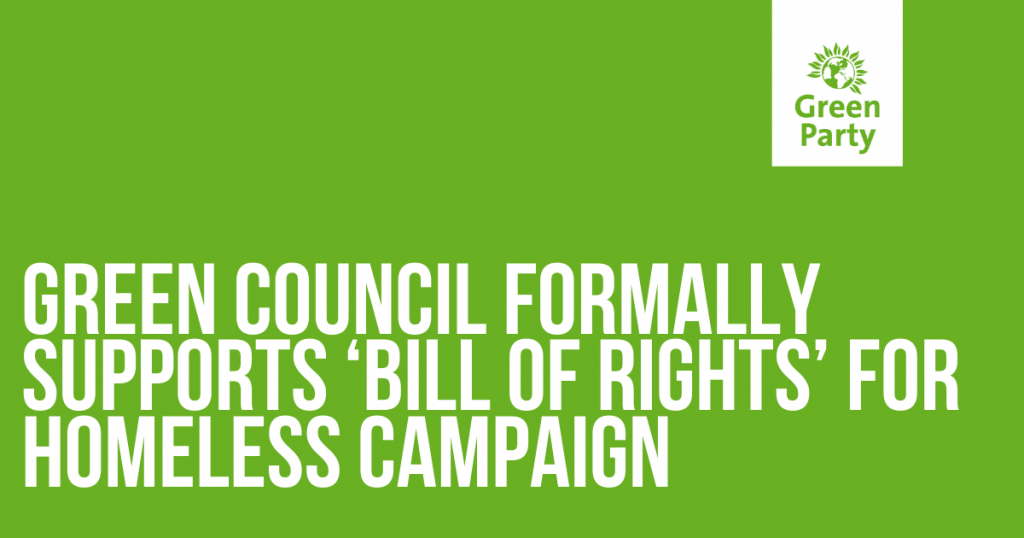 Vital that all rough sleepers are treated with dignity and equality, say Greens

Brighton & Hove City Council has become one of the first to formally adopt the homeless bill of rights as embodying the city’s aspirations for its treatment of homeless people. The ethos of a ‘bill of rights’ for homeless people – recognising their dignity and need for equality – is embedded in all work and action to support those who are homeless in the city.

The ‘Homeless Bill of Rights,’ which has also been adopted in other cities such as Barcelona, Gdansk and other Greek cities, has been developed in consultation with homeless people and is intended to contribute to better outcomes and more progressive attitudes and practices for those who end up homeless. The bill was embedded in the Homeless and Rough Sleeping Strategy in June as a standard to benchmark the council’s and its partners’ practice when working with homeless people. Brighton & Hove will now become the first UK city to adopt the Bill.

While some of the requests in the Bill are constrained by the legal limits to council powers set in national legislation, Greens want to see a stronger approach to achieving the standards set out in the Bill, asking council to work to acknowledge its important aspirations.

The council continues to make progress on the Housing Programme, a joint initiative of Green and Labour Councillors, to ensure that longer term provision of housing is achieved for all those who find themselves homeless. This includes a drive to treble the number of ‘Housing First,’ placements, an initiative that provides accommodation to support homeless people with some of the most complex needs and for whom other approaches have failed.

“Sadly some attitudes to homeless people continue to be infused with a deeply stigmatising blame on the individual. Historically, this means homeless people have often been treated as either deserving or undeserving of help, despite the many causes of homelessness and our housing crisis.

“We are proud to support this important bill, that urges all of us to right these wrongs: by recognising that absolutely fundamental principles, including equality, dignity, and access to fair and considerate treatment applies to homeless people and must be embedded in what we do.

“But more than just sending a message out about the rights of people who are homeless, we need to translate it into action; and use it to improve both day to day practice and cultural attitudes towards homeless people.”

Councillor Alex Phillips, who leads on rough sleeping for the Greens, said

“Thank you to the Brighton and Hove Housing a coalition for pushing for the Bill to be recognised by our council, separately to the homelessness strategy.

“I’m so pleased that we are paving the way with this as the first council in the country to not only recognise its aspirations through a formal vote, but also to ensure that it is embedded into our day to day work. I very much hope other councils follow suit.”

“It has been a long journey since we launched the Brighton and Hove Homeless Bill of Rights in 2018 with FEANTSA and Just Fair. Brighton & Hove Housing Coalition are immensely proud that their City has chosen to adopt the Bill of Rights.

“We all have the right to be treated with dignity and equality; we hope that the adoption and the commitment behind it means that that right will become a reality for people even when they are desperate and homeless.”