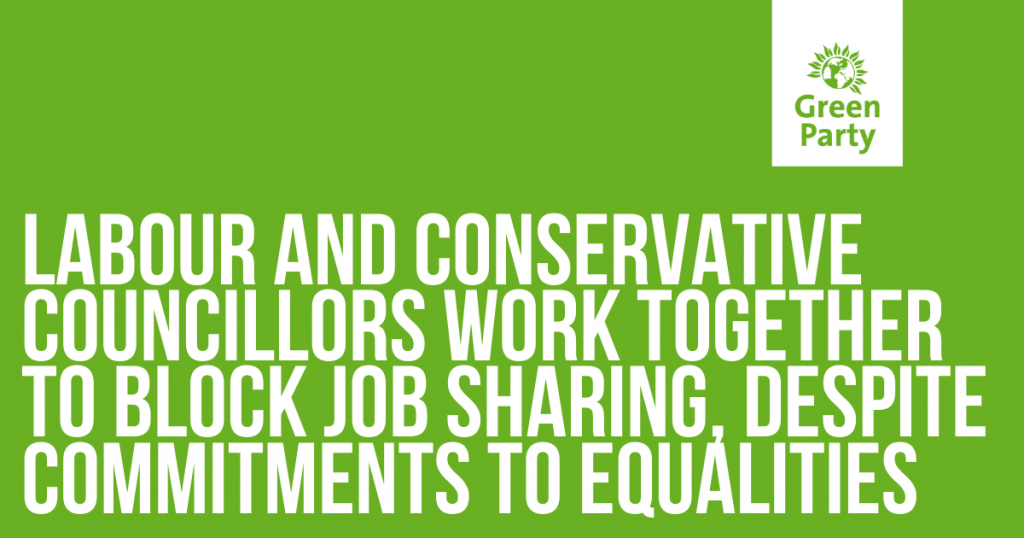 Green Councillors have hit out at moves by Labour and Conservative Councillors to block improvements to job-sharing arrangements, despite previous agreement by all councillors.

Green Councillors have today challenged the opposition parties’ commitment to equalities after they have proposed a joint amendment to today’s Policy and Resources Committee which seeks to block recommendations by the Independent body that looks at how access to public life is compensated.

The option of sharing roles in the council more flexibly was originally proposed with relevant changes to the city council’s constitutional changes. This was after councillors responded to the recommendations in the Fawcett Society ‘Women in Local Government’ report. The report recommends that to improve diversity and access to local politics, sufficient flexibility and job-sharing of council positions should be encouraged by all councils. The recommendation was agreed at a meeting of all councillors, a later report was presented to senior councillors, where Labour Councillors spoke positively about the arrangements.

Then Labour Councillor at the time, Anne Meadows, who is now standing to be a Conservative councillor commented positively on the report’s recommendations stating that “when she first became a councillor she was pregnant and had another young child, and had to take her children to some meetings. At that time officers had not thought that that was appropriate, but thankfully attitudes had now changed.”

Greens say that current job sharing arrangements allow greater access into politics for those with caring responsibilities, mental and physical health needs, and enable more people on low incomes or in employment to consider political roles. The current approach being led by the Greens of allowing ‘co-chairs,’ for example, was confirmed by councillors at a meeting in July 2020.

Despite agreeing to their implementation, Labour and Conservative Councillors are now blocking moves to make the allowances issued reflect the new arrangements. While councillor allowances are public, and do not constitute a salary, reports on access to local politics make clear that the provision of an allowance can enable those on lower incomes or with other responsibilities consider a political role. Proposals to allow those job-sharing to claim an allowance have been supported by the independent remuneration panel, a body that independently decides member allowances, and will not lead to changes in the cost for the council.

“It is shameful that both parties, who claim to stand for equalities, are seeking to block progress on making job-sharing a reality with their joint amendment. We were taken aback that Labour colleagues, who have notionally agreed to work with Green Councillors on equalities issues, would work with the Conservatives to stand in the way of this simple, but hugely significant, change.

“As a decades-old institution, which once barred access to women and others from political life, the council has a long way to go to dismantling barriers that make accessing politics difficult and inaccessible. Many may feel that councillors are undeserving of an allowance. Allowances are in the public domain, but more than this, if we are serious about welcoming more diverse politicians onto local government, and raising the voices of those on lower incomes, or balancing care and other responsibilities, we have to be realistic about the barriers, and set out ways we can remove them.

“Job sharing is one of the simplest ways we can encourage people facing these barriers to consider becoming a councillor. While we hoped to send a signal that our council could become more accessible, particularly to those with concerns about balancing a low income, care or health needs, sadly it seems that Labour and Conservative colleagues remain committed to keeping things as they are. It’s not escaped me that this move, which would disproportionately impact upon disabled councillors, women councillors and other marginalised groups, has also happened during Women’s History month.”

Under the previous Labour Council allowances were issued totalling £43,883, made up of:

These proposals would see allowances issued totalling £43,883, made up of: