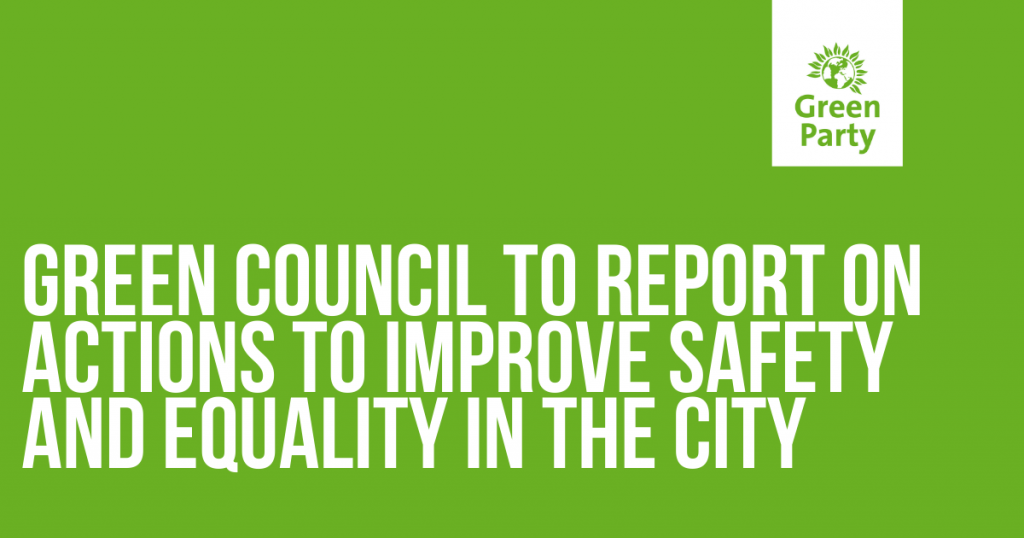 The committee responsible for equalities, community safety and planning policy is to report at its next meeting on issues and opportunities to improve safety in the city and continue work to address causes of gendered violence.

The plans follow a cross-party proposal put to all councillors last October, asking councillors endorse the Anti-Harassment Club, a local organisation that works to highlight experiences of harassment and misogyny in the city. National and local campaigns by Greens are demanding that misogyny be made a hate crime, and calling for improved engagement from the police and others responsible for public safety.

Greens say ten years of cuts to local funding from government has had corrosive effects on community safety and equalities work, with further action needed from government to address root causes of violence.

While this year’s Green council budget protected local funding for hate crime and community safety workers, and created new resources for projects focused on designing out crime, there are opportunities to do more. Greens also want to invite additional representatives from the local Police and Crime Commissioner to the meeting, to answer questions and address concerns raised by many in the community about the handling of recent vigils to commemorate the murder of Sarah Everard and other women facing violence.

Greens are committed to listening to all voices about their concerns and alongside this are today also calling on organisations, businesses, groups and residents in the city to take action to challenge discrimination, misogyny and hate.

“First and foremost we must all recognise the immense emotional toll that has been borne by women and other marginalised groups speaking out about the reality of gender based violence and public safety across the past few weeks. Tackling this issue is also about tackling multiple discrimination – recognising how harassment and violence affects disabled, LGBTQIA, black, Asian and ethnic minority groups and religious groups too. The statistics about violence in our city paint an alarming picture and demand stronger action. Behind those are also more, unreported cases.

“Ensuring safety and challenging sexist violence is a task that goes far beyond only the council – and so we want to continue the important conversation about safety in our city across the board. A report is one of the ways we can explore what the council can do within its powers, and we believe it’s vital that recommendations for action come before the public and members of all political parties. Our work will also seek cross party engagement to lobby government for stronger action; and include ways to absorb the vital contributions of survivors.”

“TECC is the committee that looks at both equalities and community safety. It also looks at local planning policy – that we know is heavily constrained by national government policy. But this is broader and deeper than just a conversation about street lights, or about public spaces. This is also about attitudes, cultures and behaviours that mean that far too often, violence or aggressive hate speech goes unchallenged, and where survivors’ trust that such issues will be taken seriously is often low.

“The council is already progressing work on this and last week Children, Young People and Skills committee heard how personal, social and health education in our local schools covers gender stereotyping, gender equality, sexist and sexual bullying and harassment, consent and healthy relationships. There is also work ongoing within the council to address the consequences of hate and violence. However to truly honour and respect the voices of those speaking out about the death of women, we want to take stronger lead on this.”