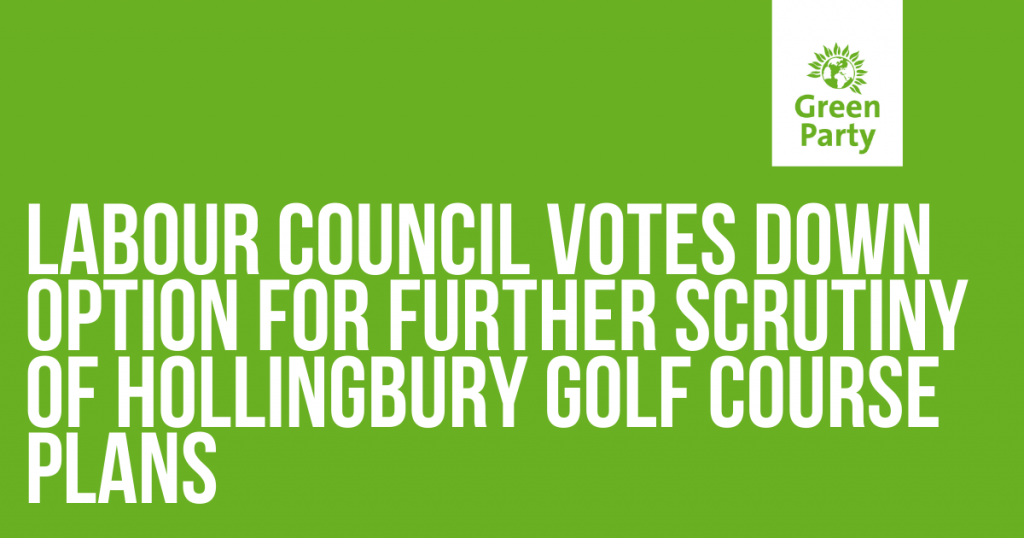 Labour and Conservative Councillors have signed a decades-long contract for Hollingbury golf course, despite a Green appeal for further consultation to take place on the long term future of the site.

Labour and Conservative councillors agreed to lease the Hollingbury site to a bidder seeking to retain the golf course for a period of up to the three years – but also agreed a further, 25 year lease.

Greens criticised the ‘rushed’ decision to award a long term lease, raising concerns that no public consultation was offered on the future of the site.

The report on options for the Hollingbury site arrived late on Tuesday, leaving just a day for the community and councillors to scrutinise proposals.

Despite the lack of consultation, a proposal from the Greens to award the initial three year lease  – and provide more scrutiny of the 25 year contract – was voted down. A Green proposal to explore an ‘in-house’ option, and include a ‘break clause’, to end the contract if it fails to meet community needs, was also rejected.

Greens have expressed dismay that councillors voted against the option of awarding only the initial three year lease, and say the Labour Council should have done more to guarantee environmental protections before signing up to a 25-year long contract.

Calling on the Labour Council to do more to ensure public consultation in future, Greens say that the plans for council owned land should be subject to more rigorous public and community involvement.

“The rushed, last-minute attempt to decide the future of the Waterhall and Hollingbury golf courses has become a huge missed opportunity to engage with our communities over the sites. The lack of public consultation has left everyone – from golfers to conservation groups – without a proper say.

“Discussions about the future of the Hollingbury course were left to the last minute – and now a decades’ long lease has been granted without any further scrutiny. All while there’s been no community consultation.

“Greens attempted to amend the proposals. We called on Labour to strengthen the lease agreement, by asking for more consultation and stronger environmental protections. We also called on the council to keep other options – such as managing the site ‘in-house’ – on the table. These safeguards are all things we assumed Labour would want too: yet our proposals were voted down by Labour and Conservative Councillors.

“Ultimately, the lack of consultation and tight deadline for a decision meant this process was deeply flawed from the beginning. Just a few years ago the council tried to sell the Downland – and Greens won the argument then for better scrutiny. Our concern is that the lessons have not been learnt. We must not see the city’s environment and our communities pushed to the side in Labour’s rush to sign the 25 year Hollingbury land deal. With a climate crisis upon us, we call on the Labour Council to show they are prepared to engage with the community over the future of council-owned land.”