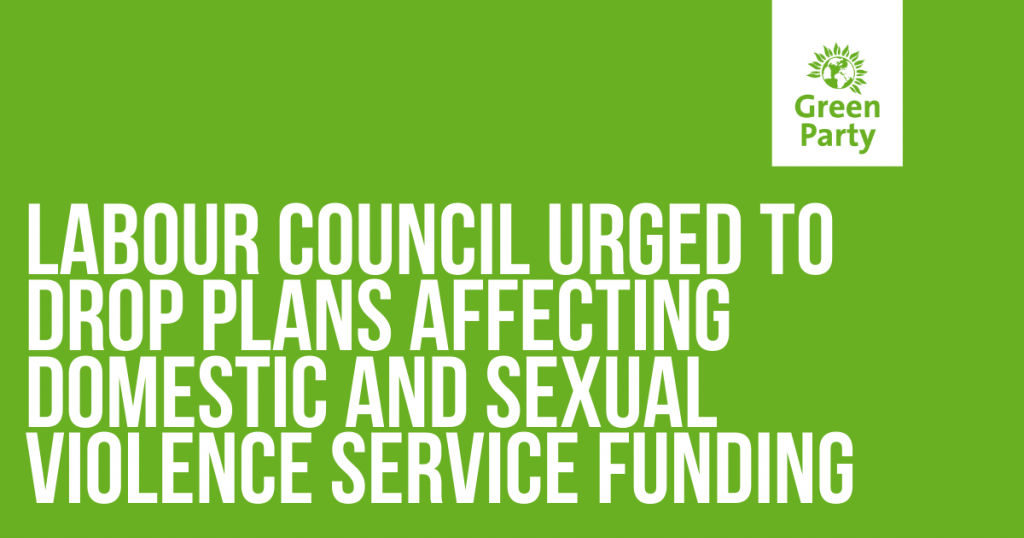 Green Councillors have responded to information on how the council’s budget will be spent this year, raising concerns about proposed cuts, including to domestic and sexual violence services in the city.

Councillors will meet at the end of February to vote on the Labour Council’s spending plans for the year ahead. Information on the proposals for next year’s council budget include:

Greens say that proposals to reduce funding for community organisations, domestic violence and disability work will affect the most vulnerable.

There are particular concerns about the proposed changes to funding for domestic and sexual violence services.  Recent council reports show that local domestic and sexual violence service providers are at times working 140% above capacity, and there are concerns that current funding levels are too low to ensure services can effectively support those in need.

“Local councils face an immense challenge to continue to provide services. Conservative austerity cuts have squeezed council budgets hard, and the squeeze is evident in the Labour Council’s budget plans.

“However, some of the cuts proposed in this latest plan will affect communities already unfairly bearing the brunt of austerity. Our concern is that many services in our city – such as those that support disabled people, or that offer domestic and sexual violence support – cannot absorb more cuts and changes. At a time when demand for these services continues to rise, we urge Labour to look again at their funding plans.

“While opposition parties are only granted six amendments to the council’s budget, we will be looking closely at the proposals this year. The impact of the budget on vulnerable residents will be at the heart of our efforts. As in previous years, Greens remain focused on prevention: looking at how to boost work that prevents problems worsening and becoming more damaging down the line.

“We also want to see a budget that responds to the climate emergency, the housing and homelessness crisis and the needs of our community and local organisations. We hope that Labour will look again at their proposed cuts and that come February, they will value our contributions and support any of our progressive amendments.”

“Once again the city is facing the prospect of damaging cuts to services this year: from cuts to learning disability services to reductions in funding for communities and equalities work. We urge Labour to look even more closely at how their budget plans can better protect our city’s most vulnerable people.

“In particular we urge the Labour Council to reverse their decision to reduce how much is spent on domestic and sexual violence programmes – we know these services are already under increased pressure and face rapidly increasing demand.

“Greens are granted only six amendments to the budget, and we know our city faces important challenges: of housing and homelessness, supporting the vulnerable and tackling the climate crisis. It’s clear that 10 years of Conservative government has hit the poorest and most vulnerable the hardest. Looking ahead to 5 more years under a Tory government, our concern is for our communities, who must be protected as much as possible from the devastating impact of cuts.”

Community and Voluntary Sector
“Evidence shows that the work of the local community and voluntary sector contributed almost £710m to the local economy in 2017-18. The CVS is not a ‘nice to have,’ – in fact, community services are often a lifeline to vulnerable people or those in need of care. Despite this, current budget plans include cuts in the council’s own communities team and potential reductions in the budget for communities and equalities work. The council’s own equality impact assessment says this could mean ‘reduced work on equalities and communities projects and an additional burden on the CVS,’ -at a time when we need support to tackle poverty and austerity, not the opposite.”


Cuts to the Learning Disability Community Care Budget
“While the Labour Council’s budget papers state that changes to learning disability funding are as a result of ‘integration’ work and maximising independence for people, the plans still propose a staggering £1.97m cut. We have been alarmed to read that these cuts could mean people with learning disabilities experience a delay accessing the welfare benefits many rely on. Greens have called for an urgent briefing on these plans, as the city urgently needs detail on the impact of this proposal.”

[4] Last year Green amendments resulted in a further £12.5m of investment into the council’s budget:

[5] Greens raised concerns about the planned cuts to the learning disability service in December of last year, as here: