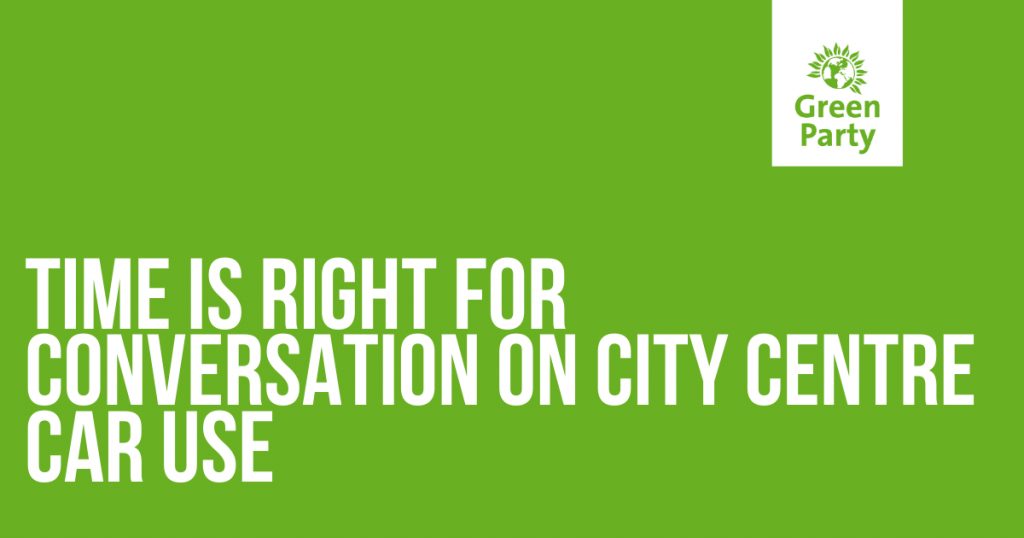 Green Councillors have called on the Labour Council in Brighton and Hove to take inspiration from other parts of the UK and bring forward a report on ‘car free’ options for the city centre.

Other cities such as York, Edinburgh and Birmingham have recently proposed consultations on how to reduce car use in city centres and promote the shift to other forms of travel. Greens say the ‘time is right’ for Brighton and Hove city council to put together a report that gives residents details on the potential options for car-free spaces. Greens want the report to emphasise the importance of exemptions, such as for people with disabilities, emergency service vehicles and traders.

Stating that it will be critical for the council to work with communities to identify the best possible solutions, Greens say the report must detail how people with accessibility needs will be considered. Pointing to the success of weekend car-free zones in areas of the North Laine and Lanes, Greens also want to see the Labour Council explore the possible economic impacts on local shops and traders.

Councillors on the committee will be asked whether they agree to a report on the possible options for car free areas in the city centre. A ‘frequently asked questions,’ has been provided by the Greens to allay concerns that councillors will vote for a ‘ban’ on car use during a meeting of Environment, Transport and Sustainability Committee on 21st January.

Cllr Amy Heley, who is calling for the report, said:

“European cities such as Amsterdam and Oslo have demonstrated that a car-free city centre can be beneficial for all. What’s more, limiting car use in city centres makes them safer, more accessible and more attractive to visit, and brings economic benefits as a result.

“Having a greater understanding of city-centre traffic is a realistic response to the emergency of the climate crisis. And it offers an opportunity to deal with congestion, road safety, and dangerous levels of air pollution which is causing a public health crisis. It’s vital that all communities in our city feel engaged and informed about what the options are – and we want to see the Labour Council explore several possibilities. This could include a trial in a specific area of the city, for example.

“At this stage, it will be useful for a report to help the city understand what the proposals emerging from other UK cities could mean. Brighton and Hove has set ambitious climate targets, and our pledge to tackle emissions is directly connected to transport use. We are calling on the council to explore thoroughly how we can become the next city to take positive action.”

Cllr Steve Davis, who will second the proposal for a report, added:

“We have an opportunity to address the climate crisis before it’s too late – and so much of this will involve looking at transport use. We are not deciding tomorrow on the future of car use in the city centre; but we are asking the Labour Council to produce a report on our options for greater car-free spaces, improving road safety and promoting cycling and walking. We want to see this open up a much-needed conversation with residents about the impact of vehicle use on our city centre, on our air quality and on our climate crisis targets.

“In parallel to this, Greens and Labour are preparing to establish a city assembly on the climate crisis – to take views and ideas for how we reach carbon neutrality by 2030. This will by necessity look in detail at transport use in the city. We hope this report can provide more information to all of us on what the options are in Brighton and Hove, as we look towards meeting our important and ambitious climate targets.”

Will the council vote for a ‘car ban’ at Tuesday’s committee?
The request from the Green Party Councillors is for the city council to explore options for car free areas of the city centre. This would be explored in a report written by council officers. There is no plan to introduce a car ban in Brighton and Hove and no such changes will come into effect as an immediate result of Tuesday’s meeting.
Councillors at the Environment, Transport and Sustainability committee will be asked to vote on whether to have a report written, looking at the options for more ‘car free’ areas in Brighton and Hove. Claims that the council will agree to a ‘car ban’ on Tuesday are incorrect.

Will there be an impact on shops and local businesses?
Large, commercial high street retail companies are reporting a downturn, largely attributed to online shopping. Studies and analysis from Business groups and organisations such as Living Streets point to the need to revitalise high streets and make them more attractive as visitor destinations, with greater focus put on accessibility and safety for pedestrians.
When plans to limit car access on weekends to other areas of the city such as East Street came forward, local businesses were supportive and viewed the changes as boosting local business, by improving the safety and accessibility of the area.
Greens want to see a proper assessment done of the possible impact on any nearby businesses, through an economic impact assessment. Separately, Greens historically have routinely called for action to address some of the main causes of the decline in high street shopping, such as fairer business rates for small business and exploring issues such as an e-commerce levy. Green have opposed plans to increase business rates.

Will residents be consulted?
Greens say that any proposed changes must be subject to a public consultation. A report will help to bring together the information on possible options, including a ‘do nothing’ option.
Working together with the Labour Party, plans are in place for the first city assembly on climate change, focusing on transport. The city assembly will help to determine the actions that the city will take, in consultation with residents. Members of the climate assembly could shape transport policy by contributing to the next local transport plan for the city.

What else is being done on air quality?
It will be the Labour-run council that decides how much information will be included in a report on how car-free areas contribute to clean air targets. Greens have asked for a feasibility study and a review of the impacts, and we want to understand more about how car-free areas can have a positive impact on public health. A recent study from the British Heart Foundation found that 460 people could die as a result of poor air quality in Brighton and Hove across the next decade.

In opposition, Greens successfully amended the budget in February which has enabled the council to push for a series of environmental improvements, including:

– more tree planting
– improvements to our cycling infrastructure, including assigning £700k towards transport and road improvements
– projects that seek to minimise our carbon footprint, including the creation of a £500k fund to support carbon reduction initiatives, agreed as a result of an amendment to the council budget made by Greens last year

Greens have also asked the Labour Council to explore
– an ultra low emission zone,
– plans from buses and taxis to move towards low emission engines; and to look at incentives for other less polluting vehicles;
– a clean air day