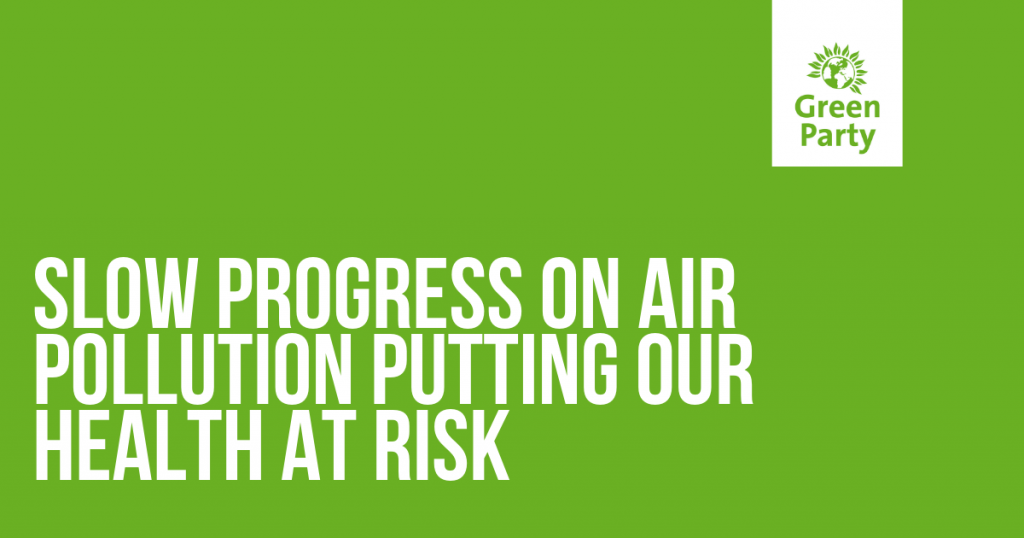 The Green Group of Councillors has repeated its call for urgent action on poor air quality in the city this Clean Air Day (20th June) saying that slow progress on air pollution is putting residents’ health at risk.

Government reports indicate that around 40,000 people die each year as a result of air pollution in the U.K. Latest analysis from Public Health England indicates that 2.4m new cases of disease will be caused by air pollution as soon as 2035 if current levels of toxic air persist, with children, the elderly and those in more deprived areas particularly affected. [1][2]

Brighton and Hove is one of 40 UK cities and towns listed by the World Health Organisation (WHO) that is at or breaching safe air pollution limits. ‘Hotspots’ in the city such as Queens Road, Western Road and Rottingdean High Street routinely breach U.K and E.U limits for nitrogen dioxide, a toxic gas that along with other pollutants is primarily emitted by vehicles. Nitrogen dioxide has also been identified as a key contributor of premature deaths and lung cancer. Children are particularly vulnerable, and damage can be permanent and life-limiting. [3][4][5]

This Clean Air Day Greens are calling for the implementation of a series of measures set out in their manifesto such as: the expansion of clean air zones; investment in better city infrastructure for walking, cycling and electric buses; and, a focus on green space and low-carbon transport. They say these measures must be urgently prioritised by the council if changes are to take effect. Greens have also said that greater protection needs to be offered to children affected by higher levels of pollutants resulting from vehicle use outside schools. [6]

A letter from Cllr Amy Heley to the next meeting of the council’s Environment, Transport and Sustainability committee has also called on the Labour council to enact ‘urgent change,’ citing proposals for a ‘Cleaner Air Day,’ agreed in February 2018 by all parties that Greens say have stalled, despite the declaration of a climate emergency made by the council last year. [7][8]

“Around the world, Clean Air Day offers us an opportunity to focus on this vital issue – but once again too little has changed. We are asking for urgent action on toxic pollution and for the Labour Council to work with us to bring about positive improvements to our city’s air quality. Given the acute health problems that result from exposure to toxic air and the urgency of the climate crisis, slow progress is unacceptable.  Following our climate emergency declaration, we will push for strong action on toxic air, including our own response to Clean Air Day.”

The letter from Councillor Heley will go to a meeting of Environment, Transport and Sustainability Committee on 25th June.

[7] In Feb 2018 Greens had previously called for a Clean Air Day: https://www.brightonhovegreens.org/2018/06/21/clean-air-day-call-for-urgent-action-ontoxic-emissions/

[8] A letter from Councillor Amy Heley has been submitted to a meeting of Brighton and Hove City Council’s Environment, Transport and Sustainability Committee on 25th June:http://present.brighton-hove.gov.uk/Published/C00000823/M00009506/AI00073627/$Item7cLetterAmyHeleyETS25062019.docxA.ps.pdf