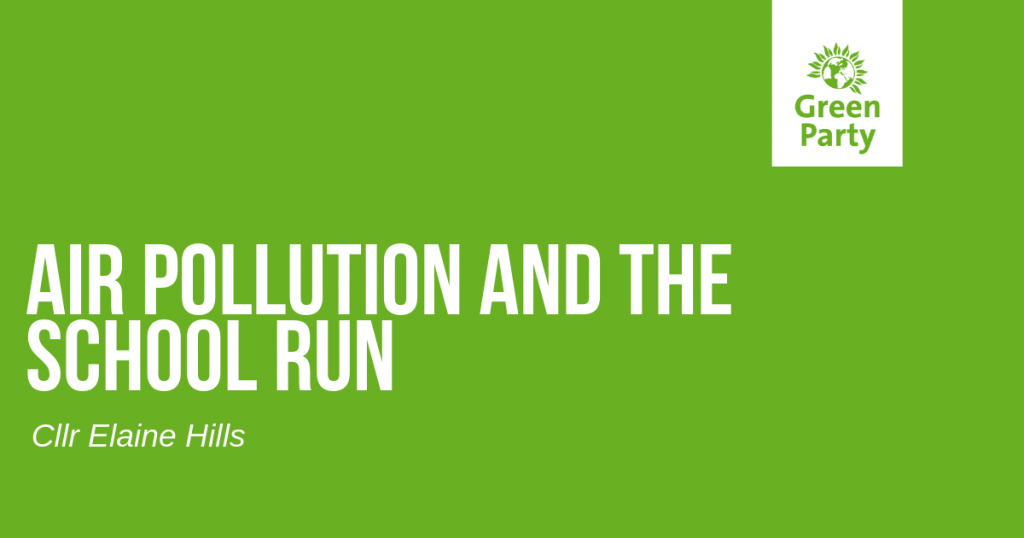 This post is written by Cllr Elaine Hills, Councillor for Hanover and Elm Grove Ward.

Every weekday morning in term-time, a massive queue of cars crawls along outside my daughter’s school in Brighton. The entire line grinds to a halt each time the car at the front stops and kids burst out. The kids go round the back to get their bags out of the boot, sometimes leaning back in to give mummy or daddy a kiss.

Meanwhile, a long line of car engines purr away, quietly pumping carbon monoxide and nitrogen dioxide into our atmosphere and into our children’s lungs. “We used to think the only real danger roads posed to children was the threat of a car accident,” says Penny Woods, chief executive of the British Lung Foundation. “However now we can see there’s an equally deadly risk: breathing in air pollution.”

At the end of the school day there are never enough spaces for all cars to park near the school, so parents pull up on double yellows, and others sneak into ‘resident only’ bays. Some leave their engines chugging away, as they wait 5, 10, even 20 anxious minutes for their little ones to emerge. This adds yet more toxic fumes to our already filthy air, which is sucked up into our kids’ lungs.

Microscopic PM25 particles are small enough, not only to get into the lungs and the bloodstream, but also to pass through nerves and into the brain, which some scientists believe can break connections between brain cells and thus reduce brain function. So the same parents that spend hours helping their kids make sense of Pythagoras’ Theorem or unravel French verb conjugations, unwittingly fill the air with particles that will hinder their children’s brain development.

A study published last month in the journal Lancet Planetary health found that traffic fumes are the main cause of childhood asthma, which affects 4 million children worldwide, and there are 11,000 new cases daily. Ella Kissi-Debrah, a 9-year-old south London schoolgirl died from an asthma attack in 2013. Her mother believes unlawful levels of pollution killed her daughter and has just been granted a new inquest to investigate the link. If a link is proven, the government will be forced to act to clean up our air. And parents will have to take their share of the responsibility.

But for one week a year, driving to school is actively discouraged. Walk to School Week aims to get as many children and school staff across the country to walk, cycle or use public transport rather than cars to get to school.

Parents and teachers can pick up a Walk to School Week resources pack, which includes ideas about planning a route to school, either on foot, by bike or by using public transport. The pack outlines the many benefits of walking to school for pupils.

These include better health due to more physical activity, greater independence and the chance to chat with friends. Oh, and it’s cheaper, of course. But the main benefit is keeping a large number of cars off the road. This one benefits our planet so should be really drummed into our kids.

Getting parents and kids involved

This week at my daughter’s school, walking to school has been gamified: an inter-house competition encourages each house to get the highest number of pupils walking to school. Members of staff are positioned at four strategic points within walking distance of the school. They hand out cards to pupils strolling past on foot, and these cards are swapped for house points. Kids have been known to cycle three miles in every day during Walk to School Week, but parents driving their kids and parking up near one of the card distribution points is more the norm.

Fortunately, school is only 20 minutes on foot for us, so walking in isn’t a problem. Unless the weather’s bad, that is. The only bus to school doesn’t come often enough and either gets my daughter to school way too early, or too late. Cycling to school is another great option for those living further away, but the narrow, hilly, car-filled streets around us make it a little too daunting.

While initiatives like Walking to School Week certainly have their place, we badly need to improve air quality, and one week a year isn’t going to help much. Walking, cycling and taking public transport to school needs to be encouraged all year round.

Our kids need to learn that a school walk is way cooler than a school run. They need to know the facts about the effect their chauffeur-driven lifestyles have on their bodies, lungs and brains. And we need to make the alternatives easier. If it’s too far to walk, all kids should have access to bus services that will get them to school on time. If we’re serious about sending out the four wheels bad, two wheels good message, cycle lane infrastructure needs to take precedence over new roads, so cycling is a safe as well as a healthy option.

Parents drive because it’s quick and convenient. Perhaps it’s time that our obsession with speed and convenience takes a back seat. Surely, safe air and healthy, well-exercised children are far more important.