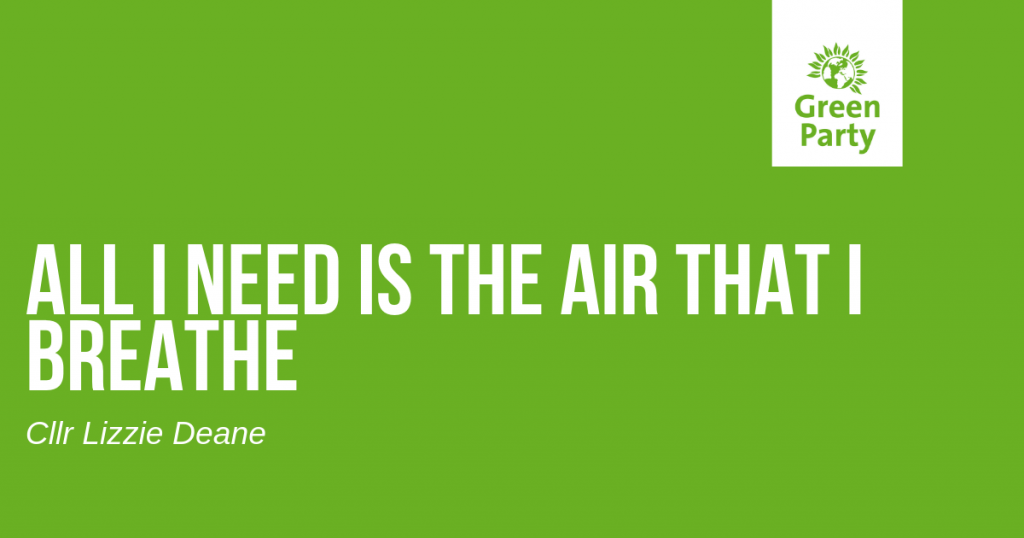 This post has been written by Cllr Lizzie Deane, Councillor for St Peter’s and North Laine Ward and Chair of the Health, Overview and Scruitiny Committee.

This is the day when we remind ourselves there is no such thing as pure, clean air, the day we push our politicians to act quickly – i.e NOW – to put things right, and the day we ourselves should make a concerted effort to play our part in cutting down on polluted air.

The notion that fresh air comes free is as old as time itself, but from the onset of the Industrial Revolution onwards, the price of what we take for granted is actually very high.

It is now widely accepted that particulate matter from vehicle and other exhausts is a cause of serious health issues, and it is estimated that diesel accounts for 40,000 premature deaths each year. Public Health England estimates that the impact of Nitrogen Dioxide (NO2) has contributed to 175 deaths in Brighton and Hove alone.

If these figures were due to say, cholera or bird flu, there would be a public outcry. But premature death is a silent killer, and we as a society should be silent no longer.

In May last year Brighton and Hove received the dubious accolade of being named by the World Health Organisation as being the one of the 40 most polluted cities and towns in the U.K.

What we’re doing about it

Green councillors have made consistent efforts to combat the rising tide of air pollution, most of which is caused by vehicle exhaust fumes. Whilst in administration in 2011-2015, we set about reducing the toxic levels of nitrous oxide by increasing alternatives to using the car – encouraging walking or taking the bus, creating more cycle lanes, introducing road safety schemes.

To a certain extent, we succeeded, and pollution levels were shown to be much reduced in 44 of the city’s 46 monitoring sites. In opposition, we have continued this fight – pushing for better walking and cycling infrastructure, calling for expansion of clean air zones and demanding an end to vehicle idling. But there remain some stubborn hotspots, such as North Street, Clock Tower, Rottingdean High Street, and now Surrey Street, which still regularly exceed legal limits.

In February this year, despite concerted efforts, North Street and the area around the Clock Tower, was named in a Friends of the Earth report on the worst top ten hotspots for nitrous oxide pollution outside London.

All this is particularly worrying for children – babies and toddlers in buggies are on much the same level as vehicle exhaust pipes. Research has shown that they breathe in around 30 per cent more noxious fumes than the rest of us, and just at the crucial stage in their lives when their lungs are still developing. Little wonder that mums in some parts of the country have formed a pressure group called Mums for Lungs!

A report brought to ETS Committee last year states that, “Air pollution is now recognised to be the largest environmental risk to public health in the UK. Poor air quality contributes to cardiovascular disease, lung growth issues in children, lung cancer and respiratory diseases as well as increasing the chances of hospital admissions, visits to A&E and respiratory and cardiovascular symptoms which interfere with everyday life, especially for vulnerable people. Brighton & Hove City Council, therefore, has a leadership role to play in adopting a single, joined up approach to improving air quality for the City.”

So it is odd that, whilst researching for this article, I looked up Clean Air Day on the council’s website to see what is going on in our city to mark today, I find absolutely nothing! And this, despite the Greens’ successful motion to Full Council last year asking for this. So much for our council ‘taking a leadership role’ …

Lip service at a national level

Looking at the national picture, the government has announced measures that could place the U.K at the forefront in the fight against climate change. It’s a bit of a shame, then, that this same government has yet to challenge plans for Heathrow’s third runway, and an even further shame that Philip Hammond is trying to put the dampeners on crucial legislation by only thinking of the money.

In the meantime, today is as good a day as any for all of us as individuals to make a start. Just for one day (or longer if you can) put the car away, walk the kids to school, take a stroll to the shops, ride a bike along the seafront or to the park. And just enjoy some lungfuls of good clean fresh air while you can. Because unless we can make permanent, radical changes, it will all be back to normal tomorrow.

We’ve renewed our call for a Cleaner Air Day – click here to read our press release.