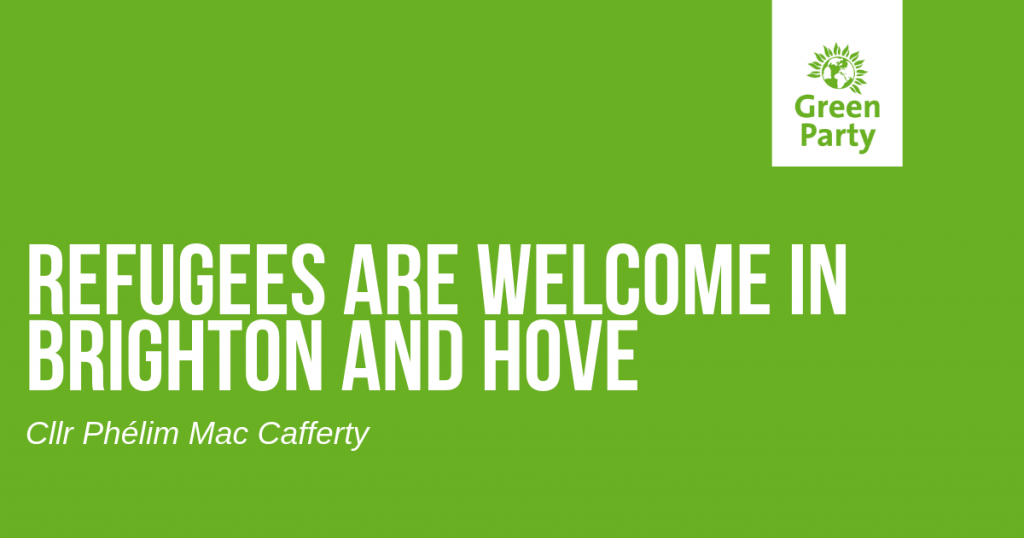 This post has been written by Cllr Phélim Mac Cafferty, Convenor of the Green Group on Brighton and Hove City Council.

This week is Refugee Week – an important point in the calendar to celebrate human rights and to understand the work to welcome people fleeing some of the world’s most horrific circumstances. Brighton and Hove has many wonderful initiatives supporting refugees but against the backdrop of rising hate crime and a post-Brexit, anti-immigration rhetoric, refugee week is a critical opportunity to nail some myths.

Refugees, we are told, are scroungers, yet the World Bank reported in 2015 that ‘in most countries migrants pay more than they receive’. People seeking refugee status are banned from work, forced to rely on £36.75 a week – too little to meet essential living costs, especially for children. A local report on migrants identified that two-thirds of destitute asylum seekers just want to be able to work while analysis from Lift the Ban Coalition estimates to do so would benefit the economy by over £40m. The UK is suffering skills shortages in health, around 1,200 medically qualified refugees are on the database of the British Medical Association. Far from the rhetoric, in reality refugees are being held back from our communities by punitive government policy.

Greens celebrate our refugee communities and will always challenge racist rhetoric about immigration. It’s vital we change the narrative that demonises some of the most vulnerable – and reject the populist politics that propagates racist myths. Tellingly, public opinion is increasingly out of step with government policy on refugees. Despite Theresa May’s ‘hostile environment’ policy for migrants, over half of the UK population surveyed last May felt that refugees deserve more support.

With Windrush Day on June 22, we are also reminded that the same government that stigmatises refugees has also devastated the lives of migrants residing here their entire lives. That the UK is the only European country where people can be kept in immigration detention without a time limit is a shameful indictment of a failed system that needs to be massively overhauled. But the way in which we face down populist politicians and their newspaper headlines is to be clear: refugees are welcome here.

This piece originally appeared in Brighton and Hove Indpendent.