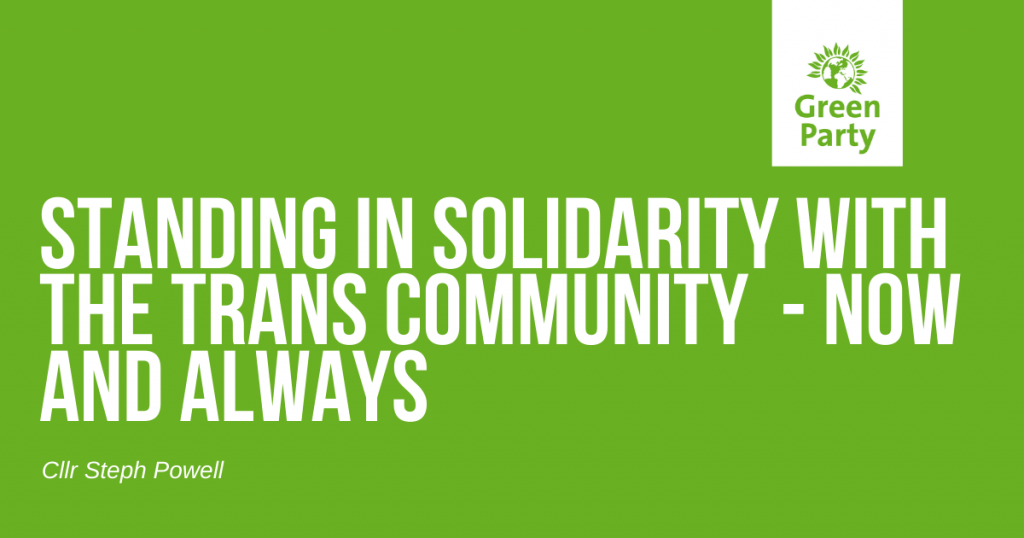 This year we recognize the challenges that the Trans community still face.

Reports and statistics show us that Trans people are still confronted by discrimination on a huge scale, with prejudice and ignorance being the main drivers. A report from the Guardian explains that “Transphobic attacks have soared in recent years, trebling from 550 reports to 1,650 over the period examined. Almost half (46%) of these crimes in 2017-2018 were violent offences, ranging from common assault to grievous bodily harm…..”

2018-2019 has seen a staggering 81% rise nationally in Trans hate crime across the UK. Worryingly, more locally in Brighton & Hove, hate crimes against transgender people now account for around 43% of hate crimes overall.

As we join Trans Day of Remembrance, we must continue to stand against discrimination and hatred in all its forms, now more than ever.

While we have come a long way in the push for equality, there is still further to go. Despite the legislation enshrined here in the UK in the Equality Act, and of course changing attitudes, we are far from an equal society.  Around the world, the picture is even more disturbing.

On 13th April 2019, The Guardian reported that in the USA, President Trump had disturbingly reversed the policy of allowing Trans people to serve in the military:  “With the implementation of this transgender military ban, our nation is once again shamefully forcing brave American heroes to hide who they are in order to serve,” said Ashley Broadway-Mack, the president of the American Military Partner Association.”

It went on to say that around 10,000 Trans people “may be serving in the military across active service and reserves […]But they have rarely been able to be open about their identity or transition while serving.” Worryingly, it went on to say:

“The official “Don’t ask, don’t tell” policy that prevented gay people from serving openly was brought to an end in 2011, but it was only in 2016 that former president Barack Obama lifted restrictions barring trans people.”   This retrograde step by Trump takes the USA back some 30 years – back into the closet – when being gay in the military was an absolute no-no. On top of this, it further isolates and stigmatises trans people.

In many parts of the world still today, LGBT+ people face all sorts of issues in the form of discrimination, and not being protected by the same laws as non-LGBT+ person. Some countries will even put LGBT+ people to death for who they are. Although around 30 countries have legalised same-sex marriage, in around 70 other countries, it is impossible to live freely – and with the same rights, as non-LGBT+ persons.  For some LGBT+ people, this means living in daily fear. There is so much more work to be done.

LISTENING TO THE TRANS COMMUNITY

As with any community, listening to the voices of the Trans community itself is the way to go.  As an ally, this means a continuous dialogue to understanding. This means respecting a person’s choice of pronouns, and using gender-inclusive language. It’s also about accepting that as humans, we often get things wrong and make mistakes about others’ identities. It is about being mindful of this; by being unafraid to recognize it, and more importantly to just simply correct it.

We are very lucky in Brighton & Hove to be a City of Sanctuary . We have a vibrant and supportive local charity sector.   Groups such as Trans Alliance Brighton, The Clare Project, the LGBT+ Switchboard and others offer Trans awareness training. This is something which I requested in an amendment in the Neighbourhood, Inclusion and Communities Committee, where I called for all City Councillors be offered this training going-forward.

As the first council to undertake a review of the needs of transgender people in our city, Greens will always stand with our trans community.  We have a rise in hatred across the UK and across the world. If we do not protect the most vulnerable and keep our eye on the ball with the Trans community, disabled people and race equality, we have lost our way.

Now and always, we must continue to stand with – and celebrate – our trans community, and ensure that the push for genuine equality goes on.

Cllr Steph Powell is a Green Party Councillor on Brighton & Hove City Council. She identifies as a cis-gender, gay woman.