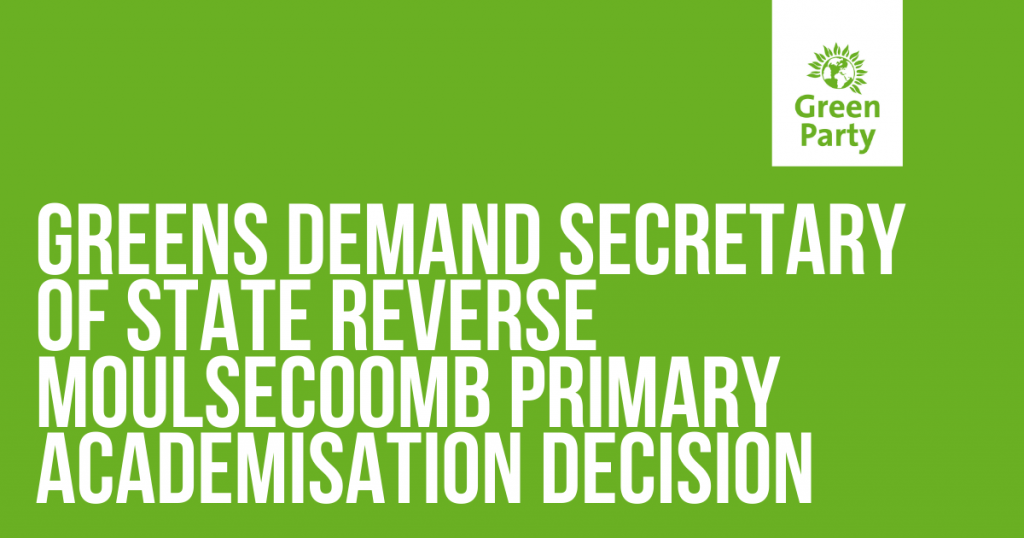 Green Councillors, who will be joining school staff, parents and community members striking against plans to turn Moulsecoomb Primary School into an academy, have written to the Secretary of State demanding an end to the academy order.

The Green Party has consistently opposed academies and say that academy orders – which force schools out of local council support and into private management by academy trusts – are wholly undemocratic and hugely damaging for pupils.

In a letter to Gavin Williamson CBE, Secretary of State for Education, Green Councillors say that plans to take the Primary School out of local council control is an action that completely ignores parent, staff and community concerns.

Greens have also expressed concerns over ‘New Horizons,’ the academy trust currently identified to take control of the school.

Press reports have revealed that the Academy Trust has failed to adequately manage at least one school under its control. In one case, almost half of all teaching staff at one school managed by the Trust left within a year of New Horizons taking charge.

At a recent meeting of Children, Young People and Skills Committee, Green Councillors secured an agreement that a report will come before Councillors on the suitability of New Horizons.  Greens have also condemned the lack of democratic accountability of academy organisations, and say that while the minutes of discussions of the New Horizons Trust Board should be available, no records exist online.

The letter, sent to the Secretary of State today, states: “As community representatives, we will not stand by as local parents and children demand the school is kept under local authority control, while academisation continues. We ask you to reconsider the academy order, and allow Brighton and Hove City Council the chance to continue supporting the community at Moulsecoomb.”

It follows a letter sent by the Green Group of Councillors in July to the Regional Schools Commissioner, which stressed that “every single councillor on the [children’s] committee voted in favour of revoking the academy order.”  The letter praised the school’s “role in the community for providing pastoral care, mental health support and guidance for children facing complex challenges” despite being in “the top 10% most deprived wards in the country”.

“Green Councillors have always been clear – we will oppose academisation at our city’s schools. We were proud to lead the campaign to stop the academisation of Hove Park School and ensure the voices of parents were heard. Our letter today asks the Secretary of State to do the same – listen to the voices of our community.

“We look forward to a response from the Secretary of State – anything less than a decision to revoke the academy order is not good enough. At the highest level, decision makers are failing to recognise that Moulsecoomb is improving. But we will always stand with staff and our community in fighting this unjust decision, and continue to call leaders to account.”