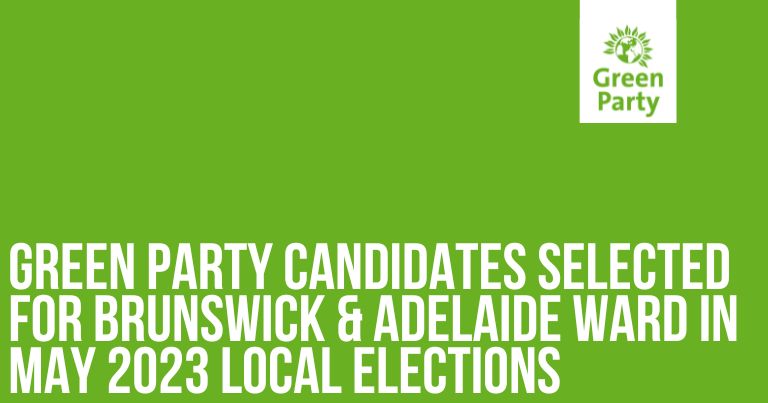 Brighton and Hove Green Party has re-selected Councillors Hannah Allbrooke and Phélim Mac Cafferty for Brunswick and Adelaide ward in the upcoming local council elections in May 2023.

Councillor Phélim Mac Cafferty has represented Brunswick and Adelaide ward since 2011 and will be re-standing for his fourth term. He is currently Leader of the Council, and has been Convenor of the Green Group of Councillors since 2015.

Councillor Hannah Allbrooke (née Clare) was first elected to Brunswick and Adelaide ward in 2019. Since greens took over leadership of the council in July 2020, she has been Deputy Leader and Chair of the Children Young People and Skills Committee. As chair Hannah has advocated for stronger youth engagement, action on racism and better support for children and families who face barriers. She works for a local charity in communications and lives in Hove with her partner.

Alongside Cllr Siriol Hugh-Jones, who will be standing in Hollingdean and Fiveways ward, this means that the current council leadership team are all standing for re-election. Greens say this shows the party’s commitment to providing continuity and experience as the council continues to face a number of key challenges including a drastic gap in the council’s budget and the climate crisis. Green candidates have been selected by local members without interference from a regional or national party.

“Over the last few years we’ve relentlessly focussed on tackling the key issues facing the city. Despite 12 years of Tory Government corruption and cuts which have taken a sledgehammer to our budget we have made steady progress in making Brighton and Hove a greener and fairer place. All at the same time as a crippling pandemic, the cost of living crisis, the disastrous mini-budget, the highest inflation in a generation and a recession.

“There is more work to be done and we are hungry for more success, jobs and a sustainable environment for the city. Having represented the communities in Brunswick and Adelaide for the last 11 years, I want to use my experience and focus to ensure the council continues to deliver what we can and what is best for the community, in the difficult times we’re living.”

“I’m delighted to be standing again to represent the Green Party in Brunswick and Adelaide ward.

“This bustling area of the city is one that benefits from incredibly engaged communities that I love working alongside. Many of our residents also give huge amounts of their time to make their area better and to organise events for the benefit of the community, due to the loss of resources the council can provide against the backdrop of 12 years of vicious tory cuts. They also passionately defended Brunswick and Adelaide in the recent boundary review to retain the important Hove boundary.

“I have enjoyed my time as a councillor over the last few years and feel we have made real progress towards creating a fairer Brighton & Hove. But there is so much more to be done, and the rising costs of living will only make this work more important. I hope residents will re-elect me next May so I can continue working to make our city fairer for those who need our support the most. “