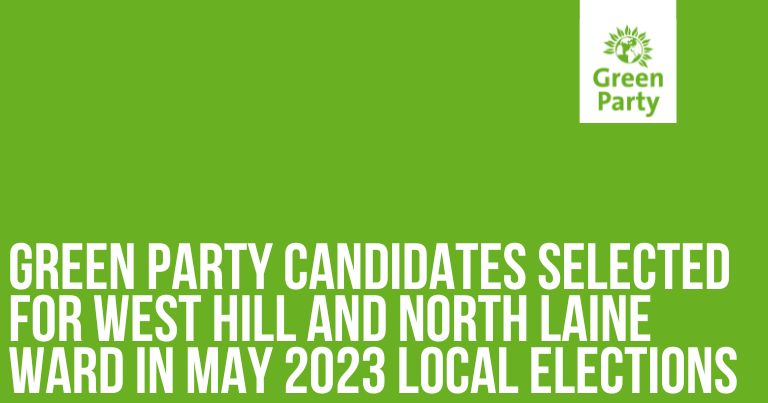 Brighton and Hove Green Party has selected Councillor Sue Shanks and community activist Ellen McLeay as candidates for the new West Hill and North Laine ward in the upcoming local council elections in May 2023.

Brighton and Hove Green Party has selected Councillor Sue Shanks and community activist Ellen McLeay as candidates for the new West Hill and North Laine ward in the upcoming local council elections in May 2023.

The new ward is composed of parts of the current St Peter’s and North Laine ward, which has been represented by Green councillors since its creation in 2003, and the former St Peter’s ward since 1996.

Councillor Sue Shanks has represented the area since May 2019, having previously represented Withdean ward in 2011-2015. She is currently chair of the city’s Health & Wellbeing Board and was previously Deputy Leader of the City Council. Her work with the Health & Wellbeing Board has made her passionate about improving the health of all our residents.

Ellen McLeay has lived in the ward for 12 years and has been an active member of Brighton and Hove Green Party, as well as local community groups. She works as a Conference Producer for a local events company promoting innovation for sustainable futures, and regularly volunteers to improve community green spaces within the ward.

Councillor Lizzie Deane, who is currently Mayor of Brighton and Hove, has announced she will not be restanding.

“This ward is the heart of our city and has many different challenges and delights. Every day brings new challenges for communities. Change is a constant here but also the need to preserve our heritage.

I try to be a listener and someone who can voice residents’ concerns when they need support and welcome the opportunity to continue this important work.”

“I am delighted to be standing alongside Councillor Sue Shanks who has worked hard for this area the past four years. I look forward to working with Sue and the community to tackle the biggest challenges facing our ward.”

“This central city ward has seen a significant number of new developments since I moved here 12 years ago, and while it’s fantastic to have much needed housing developed in the area, we also need to make sure that the needs and concerns of local residents and business owners are addressed.”

“As I raise a young family of my own, I want to see continued improvements to local facilities supporting those most impacted by the cost-of-living crisis. I’m proud to be standing for a party that puts future generations and their lives at the heart of their policies, fighting for social and environmental justice.”

Councillor Lizzie Deane, who was first elected in a by-election in 2010 following the late Keith Taylor entering the European Parliament chose to not restand. She added:

“After serving as a councillor for nearly 13 years, I am not seeking re-election in May. Representing a city centre ward with the biggest electorate in Brighton and Hove has not been without its challenges, but having served as Chair of Licensing Committee, Deputy Leader, and now Mayor, it has been a totally fulfilling and rewarding experience.”