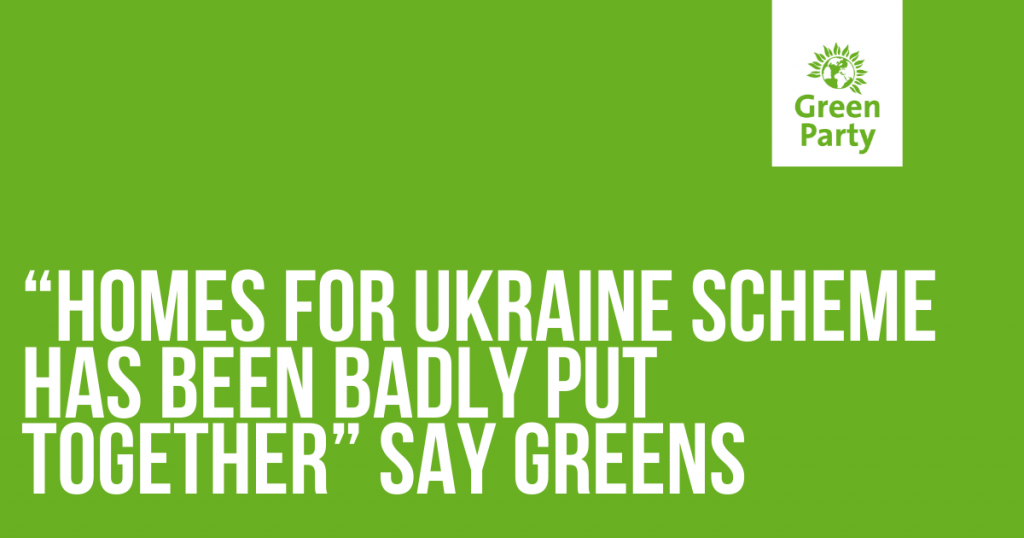 Green councillors have once again challenged the Government’s flagship ‘Homes for Ukraine’ scheme. This follows a story in The Guardian of a Ukrainian who was left homeless in Brighton & Hove as her placement fell through.

Greens say that the scheme has few safeguards in place and raised concerns that there is no mechanism for finding replacement hosts.

After the announcement of the scheme, Council Leader Phélim Mac Cafferty joined Richard Williams, Chair of Sanctuary on Sea in writing to government. Together they raised a number of questions that needed to be answered. As of yet, they have received no reply from Government.

In their letter they wrote:

“Without a clear plan to adequately resource and equip local councils and communities, it is likely this country will fall short of the commitments recently made by government and ministers to help those displaced, fleeing conflict and persecution.

“We urge you to ensure safe passage and a compassionate, well-resourced response to refugees regardless of where they come from. The best time to act has already passed us by – the secondbest time to act is now.”

Speaking to the Guardian, Cllr Hannah Clare, Deputy Leader of the Council said

“The government’s Homes for Ukraine scheme has been badly put together. Among its flaws is the fact that there is no mechanism for councils to transfer a Ukrainian guest to an alternative sponsor when something like this happens.”

Now, Green councillors have once again called on Government to make changes to the scheme and welcome Ukrainian refugees with open arms.

“We continue to sound the alarm over the Home Office’s mismanagement of the Homes for Ukraine scheme. Just days ago, a government whistleblower was in the press stating that the scheme appears “designed to fail.” Our early evidence in Brighton & Hove is that this is sadly the case.

“Despite the crocodile tears from ministers, who claim compassion for the plight of refugees from conflict, it is still very hard for Ukraine’s refugees to find a safe home in the UK and this speaks to the continuation of the ‘hostile environment’ the Home Office has for all refugees. The Green Party still argues for visa-free access to the UK for Ukraine’s refugees.”