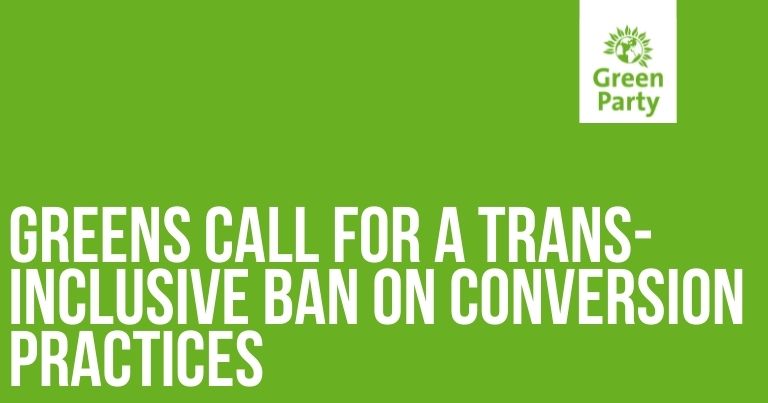 Greens have criticised the Conservative government for once again failing to maintain their 2020 pledge to ban  conversion practices despite acknowledging the practice as “absolutely abhorrent” and “has no place in this country”.

May 17th is the anniversary of the 1990 decision of the World Health Organisation to remove homosexuality from the Classification of Diseases and Related Health Problems. It is marked as an International Day Against Homophobia, Transphobia and Biphobia (IDAHOBIT), which this year celebrates the theme of Our Bodies, Our Lives, Our Rights.

“IDAHOBIT is an important reminder that both at home and abroad LGBT people continue to face violence and prejudice.

All the local figures tell us that hate crimes against LGBT people are on the rise. In response, the city council has funded third party reporting centres at The Ledward Centre and Montague House, to start on June 1st. These will be supported by the Safer Communities Team to provide community led, confidential support and third-party reporting centres for people to report hate crime and hate incidents.

Prejudice against the LGBT community persists with four in ten British people seeing gay sex as unnatural. This homophobic view is legitimised in government with the Home Secretary and a third of the Cabinet voting against equal marriage. Last week the Conservative Government broke its promise to ban conversion therapy for everyone by excluding trans people. It is clear that discrimination against LGBTIQA+ people continues, depriving members of our community of that most basic of rights – control over our own bodies.

As leader of the council I want to reassure our Trans and non-binary communities that whatever ‘single sex guidance’ the Equality and Human Rights Commission has published, this will not change our clear and firm commitment to inclusive services across the city. We will keep pushing for a complete ban on conversion therapy for our trans community too. Further to our call just a few weeks ago for a gender identity clinic, we celebrated the great news that the local NHS will open a gender identity clinic in Sussex by the end of the year.”

“I’m proud that Brighton and Hove is one of the most progressive cities in the world, leading the way on equality and human rights. But homophobic and transphobic attacks still take place in our city – as they do around the world.

And just a week after the Government breaks its promise on banning conversion therapy for everyone – with loopholes of consent and excluding trans people from the plans – it’s clear that discrimination against LGBTIQA+ people continues.

Today I stand in solidarity with all those working to challenge discrimination and pledge to continue doing all I can to bring about an end to hate crime, and make our city safe for everyone.”

We gather in solidarity with our LGBTQIA+ siblings in their fight for freedom to express and live in their bodies.