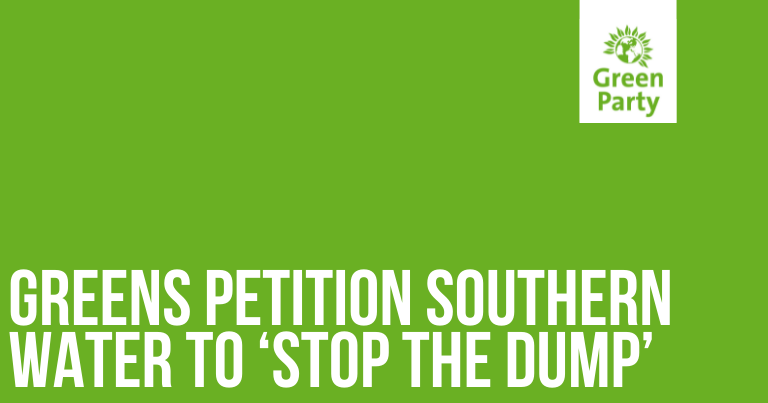 Brighton & Hove Green Party have launched a new petition calling on Southern Water to commit to reducing sewage dumps into our waters to zero.

Between 2010-2015, Southern Water knowingly dumped untreated sewage on 10,741 occasions at 17 sites examined by the EA. 78% of these occurrences were illegal. In July 2021, the company faced a record £90 million fine for illegally discharging 21 billion litres of raw sewage.

Greens say that while Southern Water is proposing to reduce sewage releases by 80% by 2030, this is not far enough.

Their petition, which was launched with a stall on Rottingdean beach on Saturday, has already reached more than 600 signatures. It calls for a commitment to ending sewage dumps, as well as further funding for projects that reduce flooding. Southern Water have already committed some funding towards a sustainable urban drainage pilot project in Patcham.

“Southern Water has been found repeatedly dumping sewage in our seas. This doesn’t just damage our precious marine wildlife it harms human health too. We believe the commitment to reduce sewage releasespollution  only by only 80% does not go far enough.

“We know that flooding is a problem that is sadly only going to get worse with climate change. That’s why, alongside stopping the dump of sewage, we’re calling for Southern Water to invest in more projects that stop flooding in the first place.”

As we slowly recover from the Pandemic it is essential visitors and residents alike can swim with confidence on our beautiful beaches particularly Rottingdean.

“It’s absolutely, completely unacceptable that sewage is released into the sea and other water as well. Nobody wants to swim in raw sewage or see nature damaged in this way. Despite this, the Conservative Government have shamefully voted to allow this sewage dumping to continue.

“As part of South Coast Sirens, I’ve been repeatedly calling on Southern Water to stop this dump. I’m proud to have launched this petition in Rottingdean to further put pressure on Southern Water. If elected on May 5th, I will continue to campaign for the protection of our marine environment.”