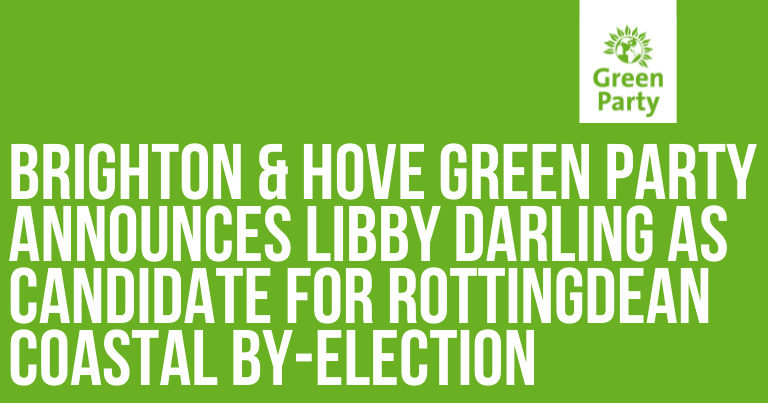 Brighton and Hove Green Party have announced Libby Darling as their candidate in the upcoming by-election in Rottingdean Coastal ward.

Brighton and Hove City Council’s ruling party, have confirmed their candidate for the upcoming by-election in Rottingdean Coastal ward. It follows the announcement of Conservative Councillor Joe Miller’s resignation.

Libby Darling previously stood for the Green Party in Moulsecoomb and Bevendean in 2019. A strong environmental activist, Libby co-founded local eco-charity Beacon Hub and has run a volunteer beach cleaning group ‘GRAB’, for over 10 years.

She has lived in the ward for 20 years with her family and works for the NHS in community paediatric therapies. Libby also served as chair of Visit Rottingdean (formerly the Rottingdean Traders Association) for 2 years.

On her selection, Libby said:

“I am extremely pleased to be selected by Brighton and Hove Green Party to provide a strong green voice in the ward.

Rottingdean Coastal ward is a gem in the city; nestled against the east of the city of Brighton and Hove, surrounded to the north, east and west by the South Downs and a Marine Conservation Zone ‘Beachy Head West’ to the south. I am looking forward to representing all of the residents that live in this beautiful coastal ward.

“I am passionate about ensuring inclusion of more women and young people in politics and proud to stand for a party that fights for equality, inclusion and environmental justice.”

“Libby is the perfect candidate to become the first Green councillor to represent Rottingdean Coastal ward on Brighton and Hove City Council. I also want to thank Cllr Joe Miller for his commitment to the ward.

“As an active community campaigner on single use plastic waste and our treasured marine environment, Libby will make a fantastic community representative for the neighbourhoods of Rottingdean, the Marina, Black Rock, Ovingdean and West Saltdean.

“We are excited about introducing our candidate and the prospect of electing a further Green councillor on Brighton & Hove City Council. I encourage voters in Rottingdean Coastal to elect Libby on May 5th and join us as we work towards a carbon neutral city.”