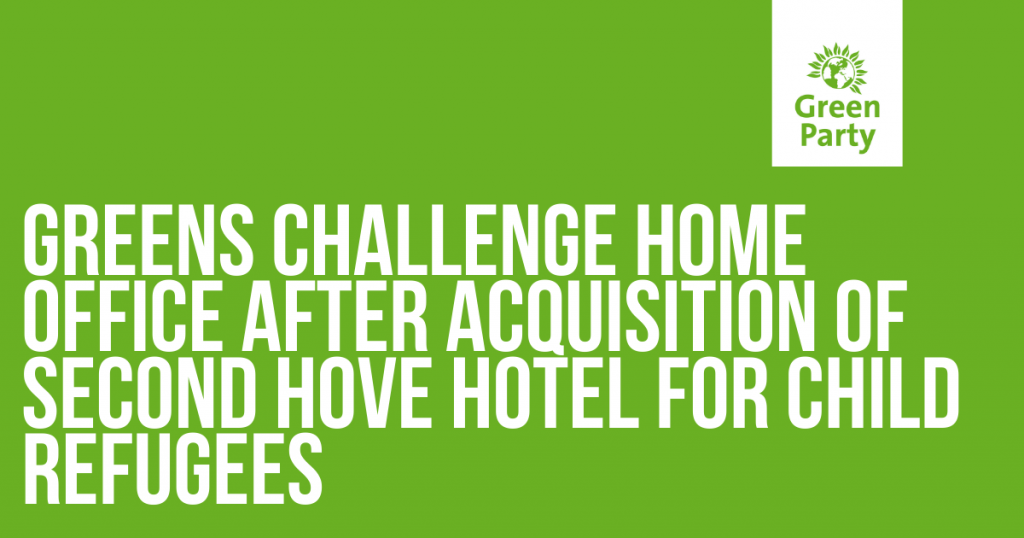 Green Councillors have expressed their anger at the “utter failure” of the Home Office, after they have opened a second hotel site for Unaccompanied Asylum-Seeking Children (UASC)

Councillors have today expressed their frustration after the Home Office commissioned a second hotel for child refugees in Hove.

It follows the opening of a site in Hove back in July, where nearly 60 young people are being held at any one time prior to being ‘transferred’ to secure homes in other local areas.

Despite repeated commitments from the Home Office that they would end the use of this site, 4 months later it still remains in operation. The Home Office have now opened a second site in Hove, where another 60 young people will be held. Both of these sites were opened with little notice and no formal or informal consultation with the council.

Greens say that it is time the Home Office faced up to the need to introduce a national mandatory scheme to ensure that all councils provide secure homes for vulnerable child refugees.

Currently under Government rules, taking UASCs into care is voluntary and many local authorities are not meeting the Government’s suggested statistical quota of 0.07% of their child population. Brighton & Hove City Council has continued to meet and exceed its quota.

“When Unaccompanied Asylum-Seeking Children arrive on our shores, they are vulnerable and need our support. They have often experienced real trauma. Yet despite this, the Government are failing to provide them with secure homes, instead housing them in hotels which is inappropriate for them and jeopardises community cohesion.

“The operation of these hotels is a direct result of failed Government policy. While our council does our bit to support these children, others look the other way. We continue to urge the Home Office to introduce a mandatory scheme for taking UASCs so each area shares the important responsibility of supporting the increasing numbers of asylum-seeking children.”

“The Home Office has continued to promise that they will end the use of the site. Yet despite this – not only does it remain open, but they’ve further extended into a second hotel. This is an outrageous way to treat these young people.

“We have today written once again to the Home Office asking them to immediately end use of both sites in Hove.”