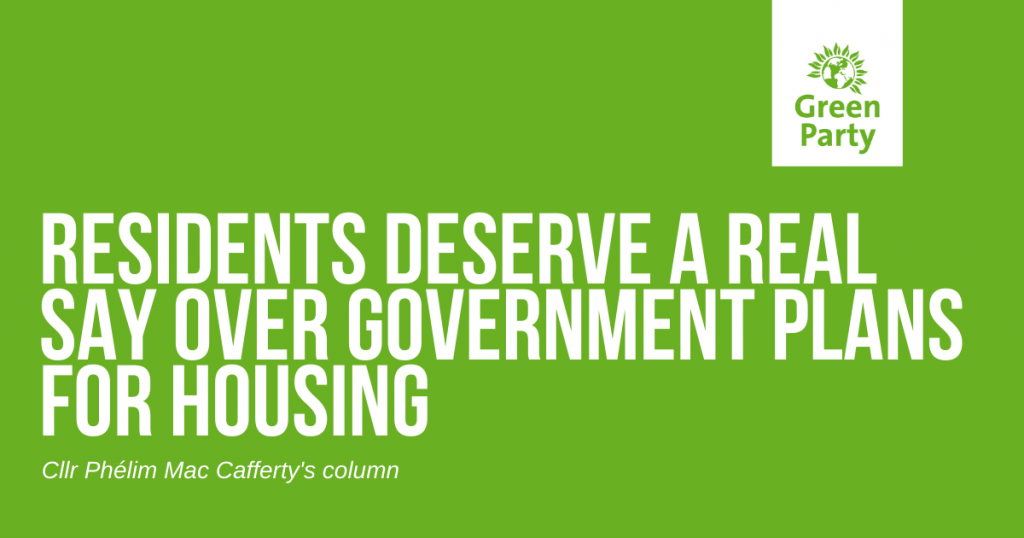 Until next Friday residents can still comment on the plan for new housing and development in our city – known as ‘City Plan Part two.’ This lays out proposals to pin down the city’s approach to housing development. It pushes for warmer homes, and includes requests for more sustainable, low-emission housebuilding. Protecting heritage sites, enhancing the environment, and conserving much of our city’s unique and beautiful architecture are included too.

The City Plan is vital. It is all that stands between local communities and the government’s plans for rampant housing development. We have been repeatedly informed that if Brighton and Hove City Council fails to show how it can meet the housing targets imposed by the Conservative government, ministers have the authority to step in and take control of local planning decisions – overriding the plan and deciding what is built and where.

That’s because instead of local decision making, everything from the number of houses we must build to the amount of affordable housing we can expect is constrained by the National Planning Policy Framework (NPPF). This policy skews the planning system in favour of developers. The NPPF sets out a presumption in favour of building, placing profit before the environment and people – and nowhere was this more clear than when the City Plan was last put before councillors earlier this year. A whole series of Green attempts to improve the plan, including a stipulation for 100% affordable housing and explicit protection for green space sites were rejected, precisely because they were ruled as incompatible with the aims for relentless development set out in the Conservative government’s national planning policy framework.

Attempts to protect green spaces from high-cost development in the plan are still at the mercy of the government’s planning inspector, who intervened to instruct the city council to build more than 600 homes a year to comply with the government’s targets. Despite ongoing debate over what is known as the urban fringe (the land on the edge of the built up area of the city), it’s often missed that it was neither the Green or Labour councils who insisted on urban fringe sites being allocated for development. Told to ‘look under every stone,’ to find more sites for housing, we are expected to find yet more places to build, including the urban fringe, even though we have made clear our city’s position.

A whole six years ago Green Cllrs argued for the damaging Tory planning laws to be axed and we continue to do so. Alarmingly, precious little has changed in favour of our local communities. Instead, the stakes are now even higher. The Conservative government has responded to the repeated calls for planning for the environment and people with an even more damaging set of proposals. A new ‘algorithm’ for calculating housing need will impose a whopping 287% increased target for housebuilding in our city. In a city where too few can afford the sheer cost of buying, plans are also in place to reduce the already paltry quantity of ‘affordable homes’ we can request from developers without falling foul of planning law.

Far from showing concern for green space, new proposals for ‘zones’ also mean that areas worth protecting from the obsession with rampant development will be defined nationally, not locally, with parts of our city designated for ‘growth’ or renewal – meaning that permission for new developments could be approved automatically, bypassing democratic involvement from locally elected councillors on the city’s planning committee, and, by definition, ignoring local objections.

These new proposals are a serious risk, causing outrage among even Conservative MPs. But they also expose the ridiculous scenes where Conservative Councillors claim that they are keen to protect our city’s green spaces from the Conservative government that repeatedly puts them under threat in the first place.

We know that residents care deeply about the future of housing in our city – we share their real concerns over what is built and where. What’s more, while local communities and councils are keen to shape the future of their neighbourhoods, the local voice in housing development is being repeatedly undermined by government proposals.

Greens and the city position is clear – we need genuinely affordable homes to support the most vulnerable and turn the tide on the housing crisis; while playing our part to manage the climate crisis. But just as the Conservative government lines the pockets of developers, these ‘targets’ put more and more land in our city at risk. We all benefit from a City Plan that puts our city’s needs – not developers – at the centre, so in addition to the consultation, we urge everyone to join us in lobbying for changes to the planning system that will truly put our city, communities and environment first.