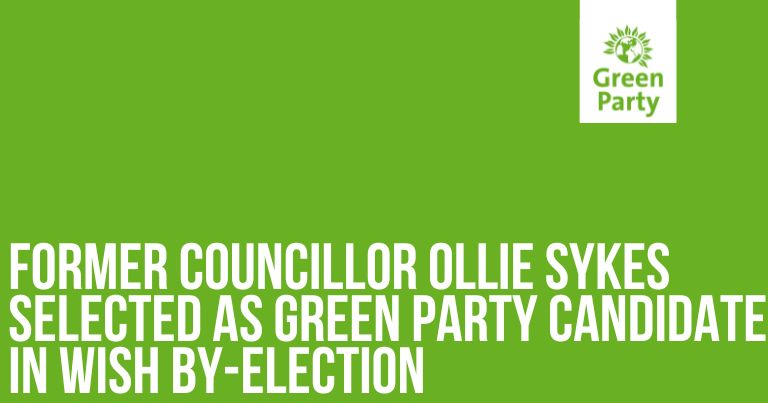 Brighton & Hove Green Party has announced that Ollie Sykes will be the Green Party candidate in the upcoming by-election in Wish.

Ollie Sykes, who represented Brunswick and Adelaide Ward between 2011-2019, will stand to represent the Green Party in the upcoming by-election.

The experienced councillor was notably the party’s finance lead for five years, before standing down in May 2019. He previously stood as the Green Party candidate for Hove in the last general election. He has continued to take an active role in the community since 2019, including as a member of the Brighton & Hove Food Partnership board.

“I’ve been inspired by the work of our green-led council since stepping aside three years ago – and they have made real progress in tackling our climate and biodiversity emergency.

“I believe that right now the city needs more green councillors. Anyone watching politics over the last few months would be horrified by the mess created by the Tory Government in Westminster, and the lack of opposition from Labour.

“The mess created by national government is letting our city down. Whether that is the increase in people needing to use food banks, children eligible for free school meals or promises of damaging cuts to vital public services – we cannot allow this to continue. If elected, I will fight to ensure we act with urgency on the crises we face.”

“I would be delighted for Ollie to join our green group of councillors again at such a crucial time. Having worked closely with him over the eight years he was a councillor, I know he is dedicated, hard-working and on top of his brief.”