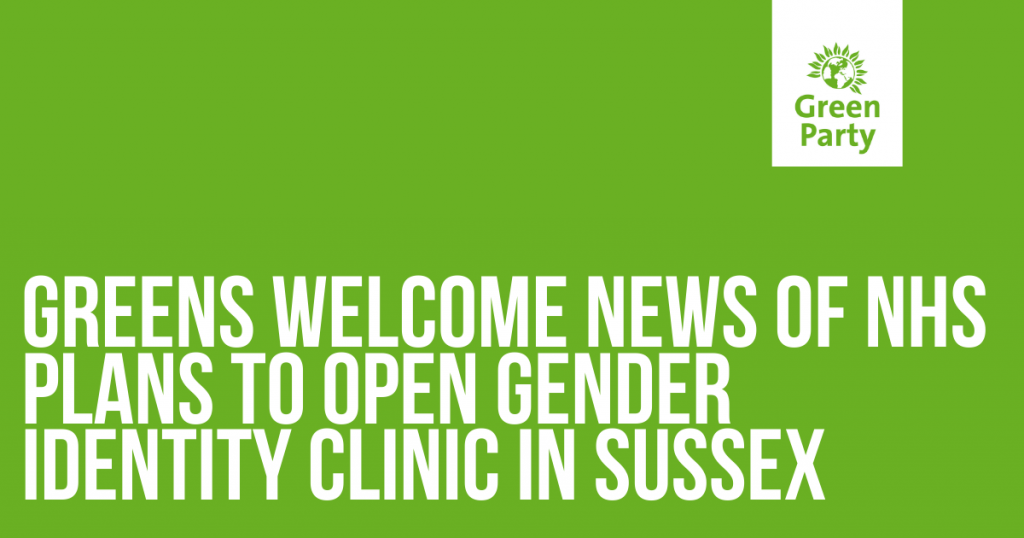 Following a joint letter from Cllrs Clare and Powell to Health Overview and Scrutiny Committee, NHS England have confirmed plans to improve access to trans healthcare in Sussex.

Green Councillors have today celebrated news that NHS England are intending to open a gender identity clinic in Sussex by the end of the year.

It follows a letter to April’s meeting of the health overview and scrutiny committee, from Green councillors Hannah Clare and Steph Powell. In the letter, Greens called for a review of trans healthcare and an update on opening a gender identity clinic in the city.

Following investigations from BBC Sussex, NHS England have confirmed their intention to open the service. Greens say this is ever more necessary, as current figures show that the waiting list for London’s gender identity clinic is over 10,000 and those referred have waits of around 5 years.

Councillors at the Health Overview and Scrutiny Committee last week agreed to a report reviewing the state of trans healthcare, which will be presented to the July meeting of the committee. This takes place the same week as Trans Pride Brighton & Hove returns for its first in-person protest in two years.

“I’m really delighted that following a request from Green councillors, NHS England have revealed their exciting plans. This will mean so much to many people who access gender affirming healthcare and I look forward to hearing more about the plans. This is ever more necessary, as the waiting times for access to these sorts of healthcare services remain high.

“In the meantime, we will continue to scrutinise the state of healthcare for trans people in our city. We look forward to seeing the details in July.”

“Trans people are right now under constant attack in the press and online and the Government’s recent announcement on conversion therapy is a further blow. We must do more for our trans residents to help them feel safe and ensure they get the right access to healthcare.

“I am therefore pleased that alongside the great news from NHS England, the committee has agreed to a report into trans healthcare. This report is also likely to contain work by Healthwatch, who have recently been commissioned to review healthcare for all people who are LGBTIQA+ in the city. I am also reassured by commitments also from the chair of our Health Overview and Scrutiny Committee that the voices of trans people will be listened to in this report.”