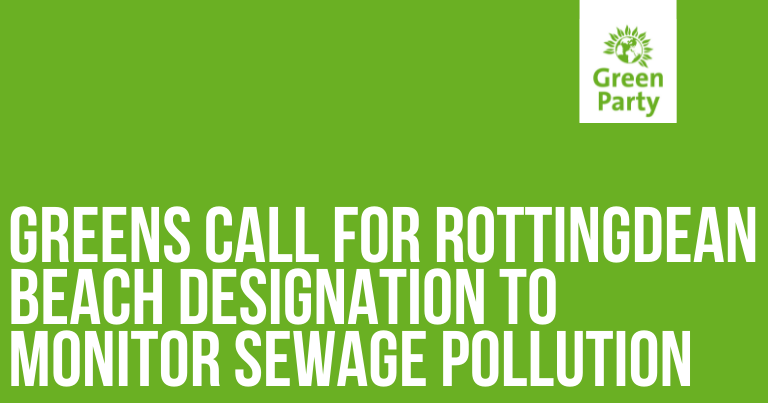 Ahead of a protest against sewage pollution held in Worthing this weekend, Green candidate in the Rottingdean by-election Libby Darling has called for Rottingdean to get access to its own water quality monitoring.

The Green Party has today called for the Environment Agency to ‘designate’ Rottingdean beach as bathing waters.

This follows on from concerns raised about Southern Water, who have been shown to be dumping sewage into our seas. Greens say that without Rottingdean beach being formally designated, swimmers and wildlife in Rottingdean ‘go unprotected’.

Brighton & Hove Green Party has recently launched a petition against sewage dumps, which has so far obtained over 800 signatures. The Green Party will be joining campaign group Surfers Against Sewage, who have organised their #EndSewagePollution protest this weekend (23 April) in Worthing seafront. Speakers at the event include Jenny Jones, a Green Party peer in the House of Lords.

“The levels of sewage pollution in our seas is unprecedented – yet swimmers and wildlife in Rottingdean go unprotected. It’s so important that the Environment Agency designates Rottingdean as a bathing area, so we can protect everyone who uses our beautiful beach from harm.

“This weekend, Greens will join climate campaigners from across Sussex in campaigning in Worthing against Southern Water polluting our seas. It’s so important we make our voices known and I urge you to join these calls, whether that is joining us at the protest or signing our petition.”