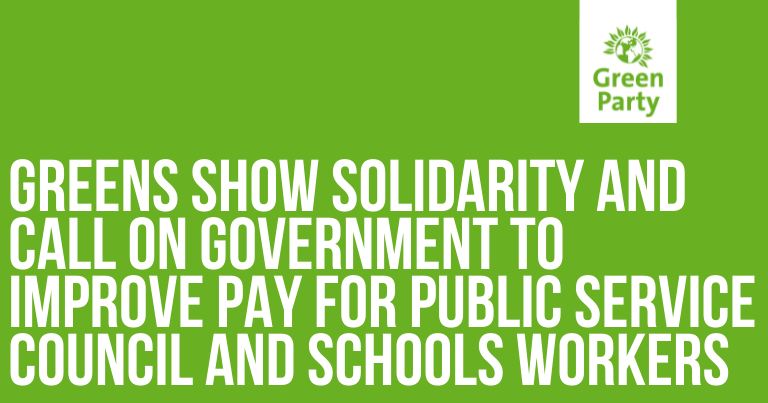 Following a successful proposal calling on all parties in Brighton & Hove City Council to back a campaign for fair pay for council and school staff,  Greens have today renewed their support for the campaign as the ballot of unionised workers opens country-wide.

Greens urged all councillors to back the campaign from trade unions calling on government to fund a proper, real-terms pay increase for council workers and schools staff in July 2021.

Unions GMB, Unite and Unison have submitted pay claims calling for fair pay for council and schools staff, following years of underfunding. Despite working to keep vital services open during the pandemic, conducting outreach to communities, continuing with teaching and support for vulnerable children, the value of pay to council and schools staff is now 25% lower than it was in 2010.

Representative trade unions are now in the process of balloting council and school staff in England, Wales and Northern Ireland in response to an offer from government to increase pay by just 1.75% – well below the rate of inflation, which currently stands at 4.2%.

Greens are clear that government must support local public service staff and ensure councils are given adequate resources to improve pay while still being able to provide essential services. Greens have also joined calls for a proper pay rise for NHS workers; and called for a reinstatement of paid bursaries for nurses, as well as supporting calls for a proper living wage and universal basic income.

Greens have released a joint statement with the trade unions as follows:

“Government must wake up to the need to fully fund a pay award rather than pass the buck onto councils already absorbing huge budget cuts, but who want to be able to support, reward and attract staff to work in hugely important public service roles.

“The Greens on Brighton & Hove City Council and its recognised unions, Unison and GMB, are united in their call for central government to fund a proper pay rise for local government and schools’ workers.

“These public sector workers have put their health and wellbeing at risk throughout the pandemic to keep vital public services going.  The current pay offer of 1.75%, is less than half of the current rate of inflation.  This constitutes a pay cut, on top of ten years of pay cuts and stagnation that have left the average public sector worker, 20-25% worse off than they were in 2010.  The equivalent of working one day a week for free.

“Everyone is facing spiralling food, utilities and childcare costs.  On top of this, public sector workers in the city face a perfect storm of unaffordable housing and wages that are lower than national and regional averages.  Average renters in Brighton & Hove are spending up to 70% of their incomes on their rent, and house prices have risen 500% in the last twenty years.

Like other local authorities across the country, Brighton & Hove City Council is facing yet another year of dwindling budgets as demand for services rises in all areas.  Central government must put its money where its mouth is and fund a pay rise that allows all local government and schools staff to live with dignity and security.  We have a Prime Minister who thinks nothing of spending £840 a roll on wallpaper, while millions of public sector workers struggle to keep a roof over their heads and food on the table.  This simply isn’t good enough.

Time for a proper pay rise, time to show real respect and care to our local government and schools workers.”