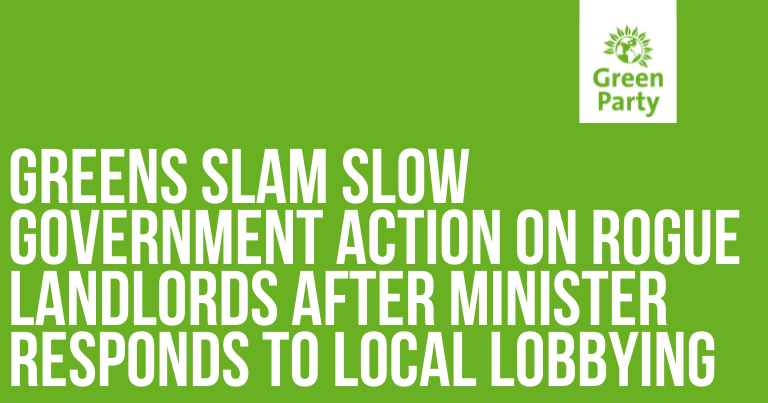 Plans for an upcoming Renters Reform Bill must include extra powers to clamp down on rogue landlords, Greens have urged government, following a letter received from the minister responsible for housing and rough sleeping.

In a lobbying letter sent to government December 2021, Green councillors pressed ministers for a national landlord register to help drive accountability for tenants in the private rented sector.

In a response since received from Eddie Hughes MP, it is suggested that reforms such as ‘lifelong deposits,’ and better standards are being planned by government, with research being done into a national landlord register. However with no guarantee or timescale for implementation, and the Conservative government mired in chaos, Greens say Conservative ministers are once again failing private renters.

A Shelter campaign has found that 45% of renters have been victims of illegal acts by their landlord or letting agent, with council enforcement teams often held back by a lack of funding to local councils, a lack of powers to act and no centralised data on landlords operating in the area.

Brighton & Hove city council has recently invested nearly £200,000  to recruit additional staff to the housing enforcement team. Work on a local licensing scheme for the city also continues after the previous Brighton & Hove scheme was rejected by government officials.

While stronger enforcement measures have been proposed, Greens say national legislation is vital to force an urgent improvement in conditions. Research from the Centre for Public Data has found that a national register would be more effective than a series of differing local licensing schemes, which have to be approved by government before implementation, causing delays in action. In Scotland, Northern Ireland and Wales, a national scheme means landlords are required to register all properties they own – a move that also helps identify failures to pay tax.

At a time when renters are being squeezed more than ever by rising costs and fuel bills, Greens welcome work with campaigners to continue to push for government action.

“While it’s welcome to hear a government minister finally acknowledge that reforms to support renters are needed, the poor response and recent chaos engulfing the Conservative party will leave tenants far from reassured that the delivery of the so-called ‘renters reform bill’ is on the cards.

“Locally, we’re doing all we can to push for better rights for renters, in the absence of any meaningful government powers. We’ve invested £200k into recruiting more people to the housing enforcement team, and we are continuing work on a local landlord licensing scheme. We’re also keen to develop a council-run, not-for-profit lettings agency.

“However it’s clear government still expects councils to jump through hoops to secure stronger powers –  expecting a huge swathe of evidence for local licensing proposals and demanding Secretary of State approval for applications covering a wide area. All the while, national landlord licensing registers are already the norm in Scotland, Wales and Northern Ireland. The same scheme for England would introduce accountability, helping to resource all councils with the data they need to address poor landlord behaviour and understand the local picture. We’ll keep pushing government on this and on rights for renters – as the cost of living continues to rise – and we welcome joint working with campaigners in the city to keep the heat on government.

“It’s beyond urgent that government works to shift the responsibility of support in the private rented sector onto landlords, to ensure better protections for tenants. As renters are being squeezed more than ever by rising costs and fuel bills, progress is needed now.”