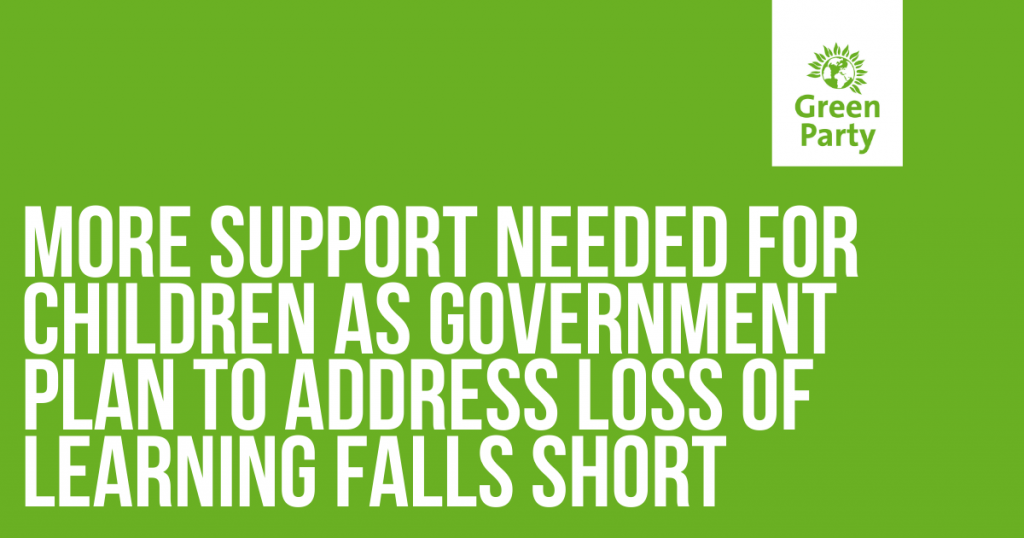 Greens have raised the need for continued support to disadvantaged pupils in the city, criticising ‘inadequate’ government proposals to help children catch up on lost learning during the pandemic.

It follows an announcement last week that the government plans to spend less than 10% of the funding that education advisor, Sir Kevan Collins, identified was needed to mitigate lost learning time. Sir Collins has subsequently resigned following the government announcement of the ‘catch up’ plan.

Greens have also raised concerns that proposals for additional hours on the school day may exacerbate existing mental health pressures for young people and staff, as demand on mental health services has increased over the last year.

Pointing to the need for more targeted, local support, the council has this week published plans to develop its own disadvantage strategy, and to review early help provision.

In a report to be heard at the Children, Young People and Skills Committee on 14th June, councillors are asked to approve the creation of a working group and give a steer on the route the strategy will take.

“Once again the Government has made a flashy announcement but failed to grasp the seriousness of the issue facing education. It’s telling that the person responsible for researching a proper ‘catch up’ plan resigned as soon as the government proposal was revealed.

“While some funding follows this announcement, we are currently awaiting further information from the government on exactly what each school in the city will receive, and what will be included.

“What we’ve seen so far suggests it won’t be enough for us to able to achieve what we want in terms of helping pupils catch up with learning they have missed and helping our most disadvantaged pupils. And additional school time could well exacerbate the mental health pressures young people have faced during the pandemic – as well as deepening the impact of the pandemic on teaching staff.

“Regardless of the national plan, our schools are already offering their pupils a great deal of positive support with their transition back to school following the pandemic. We are working closely with our schools on a range of approaches that support children’s well-being as well as their academic progress. These include a focus on play, arts and creativity, outdoor education, emotional and social support.

“But years of hardship for some families has only been compounded by the pandemic. Low incomes and poor housing already affect too many in our city. We are looking ahead to work with partners on a strategy to address disadvantage, as part of the work needed to help children in our city to thrive.”