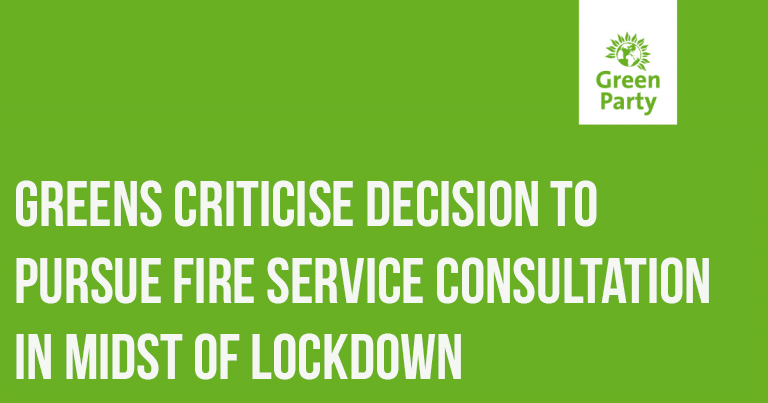 Greens say planned changes to fire service are ‘deeply worrying,’ and criticise decision to pursue consultation in midst of lockdown

Brighton and Hove Green Councillors are speaking out over a decision to press ahead with a consultation about changes to the East Sussex Fire and Rescue Service, calling for better scrutiny of ‘alarming’ plans to review resources available to fire crews.

Further to recent updates from Fire Service management and Unions, Greens say it is vital that concerns over the ‘Integrated Risk Management Plan,’ which could lead to the removal of some fire engines and a reduction in staff cover, are not ignored.

Councillors sitting on the Fire authority were asked to pursue consultation on the plans on Thursday 23rd April. Despite raising objections, Green Councillors were outvoted, meaning the consultation will now go ahead despite serious concerns over the capacity of fire service crews to respond.

Greens say attempts to continue consultation do not reflect the increased role of firefighters during Covid19, with many crews now assisting with the distribution of PPE and in some cases also driving ambulances.

Pushing for current risk management plans to reflect the opinions of frontline staff, Greens will respond to the consultation and are urging those who can to raise their concerns.

“Councillors have received a lot of correspondence from firefighters regarding their thoughts on the proposal to plough-on with a consultation, despite being in the midst of a global pandemic. The emails share a common message: do not hold this consultation now. Like the firefighters who’ve written to us, Greens are saddened that the Fire authority has voted to press ahead with an important consultation such as this, during a national crisis that has also called many of our firefighters to the frontline in varied and unexpected roles.

“There is nothing to suggest that this consultation needs to happen right now. It can be delayed, considering the extraordinary times that we are in. But Tory and Lib Dem members have voted to press ahead, saying things like ‘people have time on their hands to do this’ in the current lockdown.”

“We object to this suggestion. The public are in survival mode. I’m sure that many residents will not be willing nor necessarily able to devote time and focus to 40 mins online, in a telephone call, or completing a written survey when they are in lockdown. Many are worried about money, mortgages, maintaining jobs or looking for work, getting food, home schooling and loved ones.  Many people are also still without access to reliable internet or digital equipment, some of whom will be very vulnerable, or who will have additional needs.

“I must emphasise that Greens are not against consultation at all – far from it, but not now. We cannot support a plan to push through a consultation that ultimately places additional demands on some of the very people currently responding to covid19, and who – in many cases – are the staff that will be most affected by the proposals. The Fire Service has been busy supporting our NHS in tasks such as driving ambulances, transporting medical supplies and food.

“One thing is for sure, and that is that there has never been a more important time for an appreciation of our blue light services. They are our frontline defence, and staff do not need extra pressure at this time. While we have lost the argument on stopping the consultation, we are committed to scrutinising the plans for the future of the service and supporting staff working in these essential roles.”

“Further to more updates from the Conservative controlled Fire Authority, Greens are alarmed to see that plans could mean a reduction in staff and appliances. Resources committed for the response to emergencies are being pared back too- despite the objections of the Fire Brigades Union and staff. Worse still, the consultation which represents the key opportunity to hear from fire crews and the public on the plans is being rolled out at precisely the time when our firefighters are responding to the covid19 pandemic – driving ambulances, delivering PPE and even supporting mortuaries. The Conservative party endorses ‘clapping for key workers’, while stabbing these key workers in the back.

“The last report from the fire services inspectorate tells us the service was scored as good in responding to emergencies. (graphic attached) Yet the proposals seek to cut emergency response. This is despite the fact that many crews in the aftermath of Grenfell already feel unable to perform their most needed duty – respond to emergencies. Residents must be able to trust that resources are in place to do this, and cuts are not being masked as ‘savings’ or ‘efficiencies.’ Needless to say Greens believe these proposals are dangerous for our community- crews and residents alike and will be making our feelings on the proposals known publicly and stand with the Fire Brigades Union at this time.