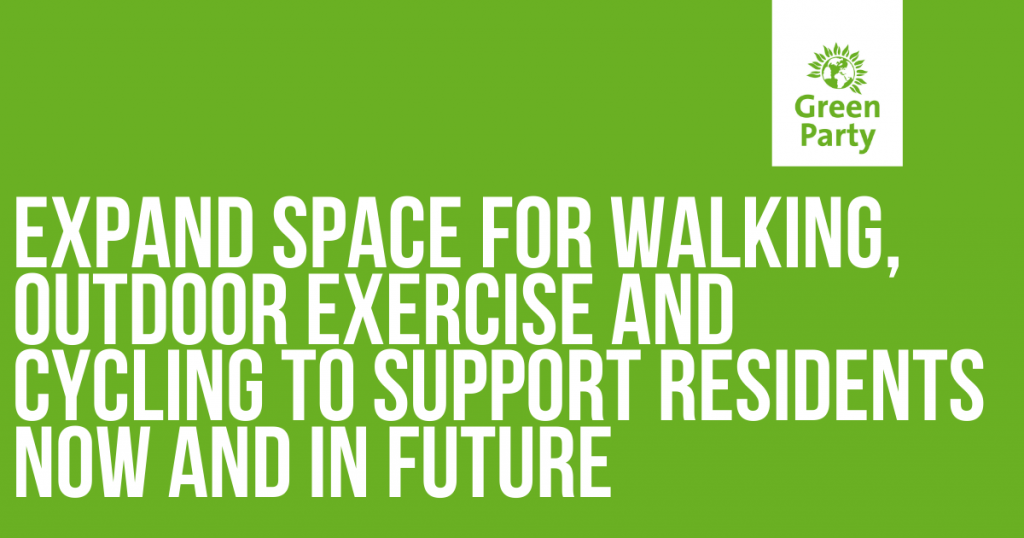 Greens have urged the Labour Council to revise their spending plans for transport and roads, arguing that further measures to support residents, such as widening pavements and new cycle lanes, can be introduced and continued even after lockdown rules are lifted.

Councillors were due to agree a set of spending plans for the city’s transport, roads and cycle network known as the Local Transport Plan, a budget drawn up prior to the covid19 pandemic.

However the plans will now be reconsidered, following a successful proposal from the Greens calling for greater efforts to widen pavements, introduce more space for cycling and exercise and bring forward road closures.

Notably, other councils have been able to make similar improvements to local transport networks without incurring significant costs or procedural barriers. In Lambeth, the city council has extended pavements in busy areas to enable people to observe ‘social distancing’ guidance while walking and exercising. Leicester City Council has installed a 500 metre cycle lane labelled a ‘keyworker corridor,’ to help essential staff make safer and quicker journeys to work by bike.

Welcoming the closure of Madeira Drive earlier this month, and given the council’s commitment to explore a ‘car free city centre,’ and reduce toxic emissions, Greens say it is vital that any measures allowing residents to enjoy clean air, walking and safer cycling remain in place long-term.

“The pandemic has underlined the serious question of how we use public space and we brought this proposal forward because so many of our residents have raised safe social distance during lockdown. We want to build on the work to restrict road access on Madeira Drive to make it easier for people walking & cycling.

From outdoor exercise, the many of us who want to be able to stretch our legs and clear our minds to cyclists enjoying new-found space on our usually busy roads. There is actually enough space, it’s about priorities. Our proposals are about affirming that our city can become better for all during lockdown which in turn will put us in a stronger place for recovery too.

From discussions we had been having with council officials, we know that some of this needs to be done effectively with the right legal arguments in place, but looking at places like Leicester they avoided this with a Keyworkers’ Corridor. Greens will keep the pressure up to make sure the city does everything in its power to help all communities to make lockdown more bearable but also to point to a different sort of future- one where we share space more fairly, one where cleaner air and safer roads mean more of us can walk, exercise and cycle. And a future where in tandem with our commitments to explore a car free city centre and deliver carbon neutrality by 2030, walking and cycling will be afforded more space, especially along the seafront dual carriageway.”

“This is really good news and will make our shared space safer for pedestrians and cyclists, will support the healthy option of walking and cycling and as a consequence play a part in the step change on emissions reductions we need to become a carbon neutral city by 2030.”