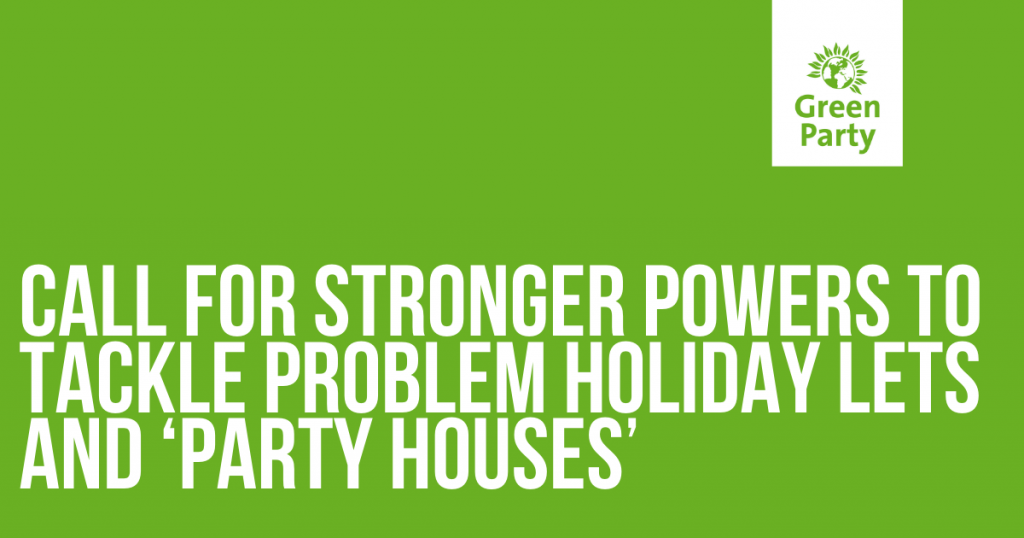 Greens have called on the council to set up a dedicated service to respond to resident complaints about short-term holiday lets, urging the council to lobby for more government powers to tackle problem properties.

A report going to a meeting of Tourism, Equalities, Communities and Culture today estimates that around 3,000 homes in the city are being used as short-term lets for visitors, with approximately 60% advertised to let as ‘entire properties.’

Greens say councils and communities are struggling to manage the impact that the holiday-let market is having on local housing supply and local communities. The process of turning a family home into a holiday let does not require planning permission, and houses advertised on platforms such as ‘AirBnB’ are not subject to any minimum or maximum stays. Restrictions designed to limit the amount of days that a residential home can be used as a holiday let are currently only applicable to London councils, and are often ineffective.

Greens have repeatedly challenged the government to regulate the market, calling on holiday-let providers to pay business rates and comply with health and safety regulations, as hotels and guesthouses are required to do.

Both the local police and East Sussex Fire and Rescue service have raised concerns over the safety of many short-term holiday let properties, stating that an increased number of homes are now being used for illegal activity, such as drug supply. Green Councillors in the city continue to receive complaints about problem ‘party houses,’ and holiday lets, particularly around noise and anti-social behaviour.

With a shortage of affordable homes in the city, Greens say the rise of the holiday let market must be balanced by the needs of local communities and the impact on housing supply. Calling for a direct council contact for complaints, Greens say greater collaboration between the council’s planning, environmental health, community safety, licensing and noise complaint departments may be needed to collect data on ‘problem’ properties and to help residents who may be negatively affected by a neighbouring ‘party house.’

“Our concern is that neither tourists nor neighbourhoods are protected from the potential negative impacts of the burgeoning short-term holiday let market. Tourists are offered cheaper accommodation in four-bed houses; often repurposed to sleep many more. Yet these lets are not required to comply with the same health and safety standards required of hotels and guest-houses, leaving it to the discretion of landlords and the companies advertising the properties.

“While there are positive examples, we know that the popularity of these companies too often mean that family homes lie vacant during the week only to become ‘party houses,’ at the weekend. Residents can complain about noise and anti-social behaviour, but the council is given little enforcement power from government – and often those responsible for disruption have left the property by the time the issue is addressed.

“Without further regulation and powers from central government, our concern is that any potential ‘benefits,’ – including economic benefits – may be cancelled out by community concerns and the impact on housing supply. The city’s hotels and guest houses pay business rates, while those profiting from repeated short-term holiday lets do not, resulting in anything but an equal playing field. Our proposals urge the government to address many of these issues. But while we await more action from government, Greens are calling for more joint working across council departments, so residents know how to raise concerns, and so the council can do more to respond to complaints.”

“We desperately need regulation to help residents address the problems caused by some short-term holiday lets, and for lets to be regulated in terms of fire safety, overcrowding, sufficient facilities for number of people, tax, change of use of buildings and length of stay. We also desperately need the percentage of short term holiday lets on any one street to be reviewed, to stop the fragmentation of communities and the negative impacts on residents’ lives.

“At the last count Camelford St, a short street between St James St and the seafront had a total of eight houses being let out as short-term holiday lets and Margaret St another short street running parallel has a total of at least five houses out of 25 operating as short-term lets. There are currently no regulations to stop more houses on these and similar streets becoming short-term holiday lets, meaning eventually these streets could have few or no permanent residents and the vibrant and diverse community, which is part of the attraction of the area, will have been lost. Many estate agents are also now encouraging landlords to switch from long-term rental contracts to short-term holiday lets due to the lack of regulation and potential for increased profit.

“Short-term holiday lets do have potential to be a positive part of our tourism offer; but we need greater accountability when residents – and visitors – raise concerns over the standards and management of these properties. At the moment we  have almost no capacity to approach the individuals or companies that are presenting the most problems.”