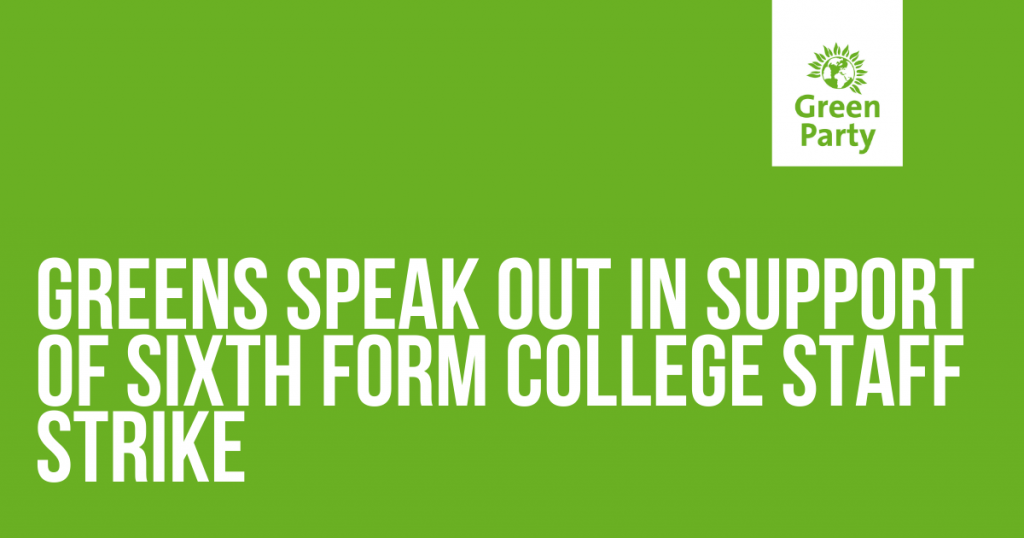 Greens will stand in solidarity with staff at Varndean College and Brighton Hove and Sussex Sixth Form College (BHASVIC) who are expected to take strike action this Thursday (17th October) in response to Government funding cuts. [1]

The strikes follow a successful ballot of members of the National Education Union, with members from colleges across the country voting in favour of action. The NEU says that post-16 sixth form college education has suffered cuts ‘deeper than any other group of education institutions.’ [2]

Analysis from the Institute of Fiscal Studies reveals that funding per student in sixth form has fallen by more than a fifth since 2010 – and that funding levels remain lower than at any point since 2002. [3]

Education unions say the funding pressures have led to reductions in staff training budgets, larger class sizes, reduced curriculum provision and cuts to enrichment activities – all of which are dramatically affecting post-16 education and the welfare of staff.

The NEU has called for sustainable funding for sixth form colleges, and say requests that the Government raise the ‘rate per student,’ and support an adequate pay increase have not been honoured by the Secretary of State for Education.

Green Councillors will join the picket lines this Thursday, and say the failure of the Conservative Government to respond to a crisis in education funding – from schools through to colleges and universities – is having an unacceptable impact on teachers and pupils.

“The Conservative  Government must address the challenges our post-16 providers face, for the welfare of staff and students alike. We believe fairly paid staff with a good work-life balance give students the education they deserve.

“We stand in full solidarity with staff at BHASVIC and Varndean in achieving their demands – which are desperately needed to save the sector.”

A statement on the BHASVIC website states that lessons are likely to be suspended on Thursday 17th. Further action may take place on Tuesday 5th November and Wednesday 20th November. [4]

Photo op: Greens will meet at BHASVIC at 7.45am Thursday, 17th October and will also attend expected action at Varndean.

[2] ‘Sixth form colleges suffered a 22% reduction in real terms funding between 2010/11 and 2016/17 – deeper cuts than any other group of education institutions.’ The National Education Union, Sixth Form Colleges Ballot and Strike: https://neu.org.uk/sixth-form-colleges-ballot-and-strike

[3] “Analysis from IFS has revealed that funding per student in sixth forms has fallen by more than a fifth (21 per cent) per student since 2010-11 – and it remains lower than at any point since 2002-03.” Institute for Fiscal Studies data, accessed via The Independent: ‘School sixth form and college funding most severely squeezed, new report says’

[5] In addition, recently announced pay rises for teaching staff do not extend to sixth-form colleges and in some cases, extra support is only given to colleges with academy status.  https://www.tes.com/news/exclusive-no-pay-rise-teachers-sixth-form-colleges