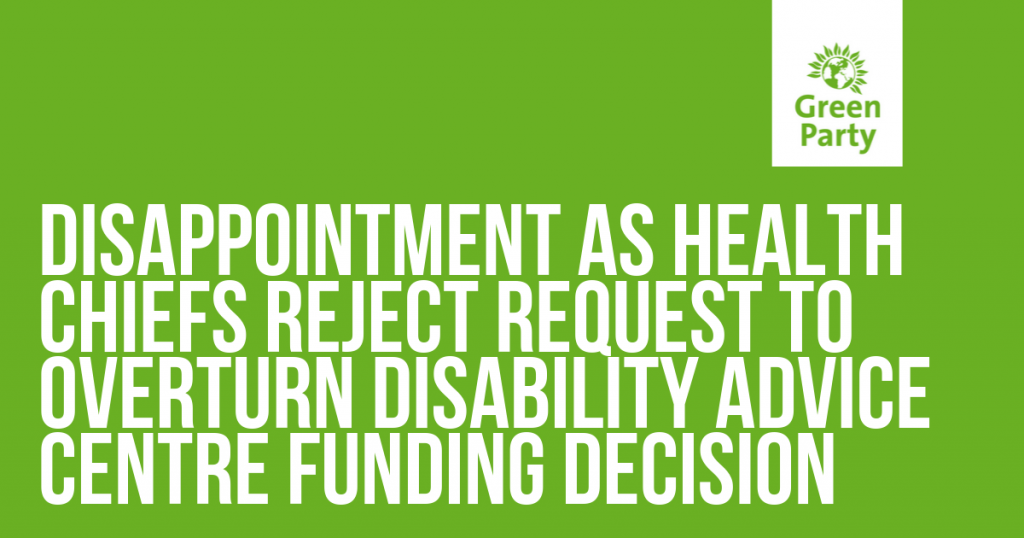 A decision by local health chiefs to withdraw funding from the city’s only specialist disability advice centre will not be overturned, despite pressure from members of the council’s health scrutiny committee.

Brighton and Hove charity Possability People were given notice in April that local health authority the Clinical Commissioning Group (CCG) would no longer fund the charity’s disability advice centre – a move that left the service at risk of immediate closure.

The announcement was condemned at the time by Green Councillors and users of the charity’s services.

Following a discussion of the issue between the CCG and the council’s Health, Overview and Scrutiny Committee, (HOSC) Chair of HOSC, Green Councillor Lizzie Deane wrote formally to the CCG requesting that they reverse the funding decision.

Pointing to issues including a lack of consultation with service users, delays in the equalities impact assessment and the short notice given to Possability People, Cllr Deane called on the CCG to reinstate the grant for the service.

However in a response to Councillor Deane – now published on the council’s website – the CCG’s clinical chair Dr David Supple has confirmed that ‘the decision will stand.’

The letter also details the CCG’s opinion that ‘there are a variety of services in the city, and nationally, which could provide support and advice to people seeking help with benefits,’ despite acknowledging that ‘we did not contact these organisations to assess their capacity.’

Cllr Deane will comment upon the contents of the letter at a meeting of HOSC today, Wednesday 16th October, expressing her disappointment at the response and urging the CCG to review the situation should more money be available in future.  Greens have raised concerns that organisations supporting vulnerable people in the city are being put under increased strain by lack of funding.

“Disabled people continue to be marginalised and often do not have adequate resources; the reality for many disabled people at this time of year is the worry about heating or eating.

“But whatever problems turn up at our Advice Centre, we know that when people are experiencing stress, the effect on their health and wellbeing is detrimental.

“We know that resources are stretched, which is why the Advice Centre’s work is crucial in supporting people through their problems so they can focus on maintaining their health and independence. Surely that’s good for the whole city?”

“We find the CCG’s decision hugely disappointing, in view of the large numbers of the most vulnerable people who have been helped over the years by the Disability Advice Centre (DAC). The centre handled 4,468 enquiries in 2018 alone – including support around welfare entitlements, food banks, accessing housing and receiving care.

“Members of all political parties on HOSC were clear that services like those provided by the DAC help people to manage their physical, mental and emotional health care needs. These preventative services have tremendous value – not only in terms of supporting people, but also in terms of cost-savings to the NHS.

“The CCG has made it painfully clear they will not review the decision, nor the way it was made – despite the arguments put forward by councillors. Possability People had to fundraise to re-open just a small part of this provision, but we are dismayed that they – and people with disabilities in our city – were left in this position when there are such clear benefits to funding disability support.”