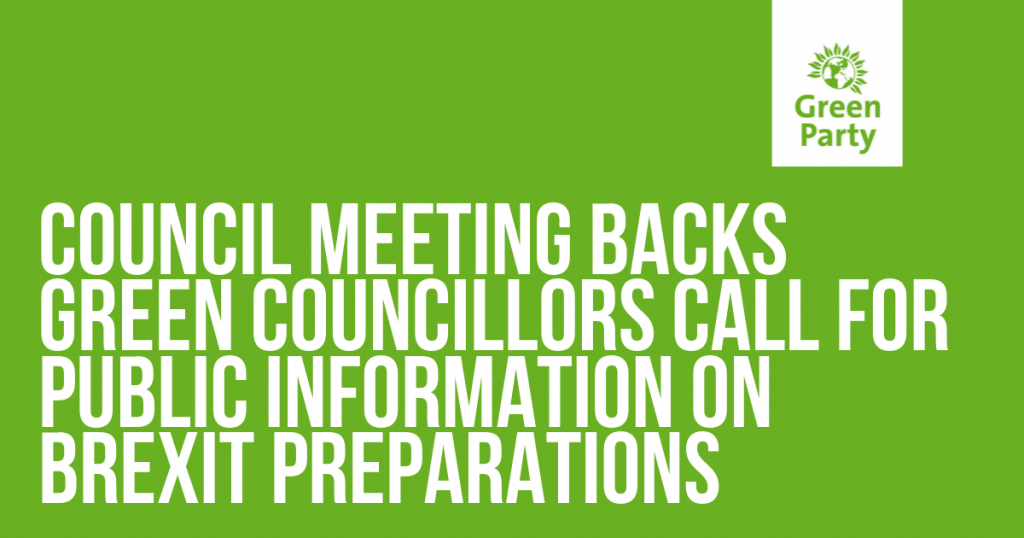 Brighton and Hove City Council has shared information on the plans to prepare for a no-deal or other Brexit scenario as a result of an emergency meeting called by the Greens.

An emergency meeting to discuss the council’s response to Brexit was called today, 3rd October, by the Greens, following a request that will also see the council contact the Prime Minister condemning his actions to suspend Parliament – and to request a People’s Vote. [1]

As a response to the emergency meeting proposals, the meeting agenda also put information about the council’s response to Brexit in the public domain – information that Green Councillors say is vital for residents, businesses and EU citizens to prepare. [2]

Citing repeated attempts to suspend Parliament – including a further notification of Parliament’s suspension made today – Greens say today’s meeting represented a vital opportunity for discussion on the response to Brexit to take place among elected councillors.

However, Green Councillors condemned the actions of local Conservative councillors who refused to participate in the public meeting, leaving their seats empty in the council chamber. Greens say the absence of the Conservatives from the discussion and debate marked a ‘shocking disrespect’ for local residents and particularly EU citizens.

Green Councillors highlighted a number of concerns over the impact of Brexit, including asking for further clarification on the likelihood of potential medicine shortages, bathing water quality, the effects on children in care, small businesses and the impact on vulnerable citizens. Local councillors also thanked council officers for their work so far to prepare the council for a variety of ‘deal’ scenarios – including a no deal.

“Since the referendum we have been asking to get the most information as possible for our city, its businesses, tourists and residents. We called this meeting on the understanding that it may be the only opportunity to discuss avoiding a no-deal Brexit – given that our own Prime Minister is taking every opportunity to shut down the discussion in Parliament. Whatever the noise of Westminster, we need to ensure that our city has the detail it needs to prepare for the potential impacts.

“A no-deal Brexit, or indeed, any Brexit – has huge potential risks particularly for our most vulnerable residents. For them and for our small businesses, our tourist industry and all those residents who have raised questions or concerns, we called for this meeting today.

“Given the possible effects of Brexit on the city, local residents deserve to know that their elected representatives are taking the issues seriously. The absence of local Conservative councillors is testament to the shocking disregard with which they have treated such a momentous issue. The impacts of their party’s neglect has been felt both by councils struggling to get the information they need from Government but also, the risks the Conservatives are taking with uncertainty over the Irish border.

“Whatever happens in the next few weeks we have to provide clarity for residents and businesses. Precisely because of the democratic deficit posed by the attempt to close down Parliament twice, it is vital that as community champions Councillors keep on discussing Brexit as the situation evolves. Our residents deserve to know that councillors are taking all steps to defend our city.”

Councillor Marianna Ebel who seconded the proposals from the Greens added:

“Whatever your feelings are on Brexit, we must ensure that the public are given the information on the effects of Brexit that we have been given as councillors. Like many other EU citizens I was deeply disappointed to see empty Tory chairs at today’s debate – after their party’s actions caused us so much distress. They should have the decency to show up and participate in the debate – especially given that this mess is one of their creation.

“In the last Full Council meeting in July, Greens put forward a proposal to give EU Citizens help when applying for settled status. This proposal has now been put into action. The hostile environment has caused fears and concerns amongst non-British EU citizens and the wider migrant community. For years we have been treated with utter disrespect by the government – and the absence of local Conservative councillors at this latest discussion sadly sends a message to local EU citizens that they have no plans to represent or listen to us.”

Information from Brighton and Hove City Council is available at: https://new.brighton-hove.gov.uk/news/2019/get-ready-brexit including further advice on applying for Settled Status.