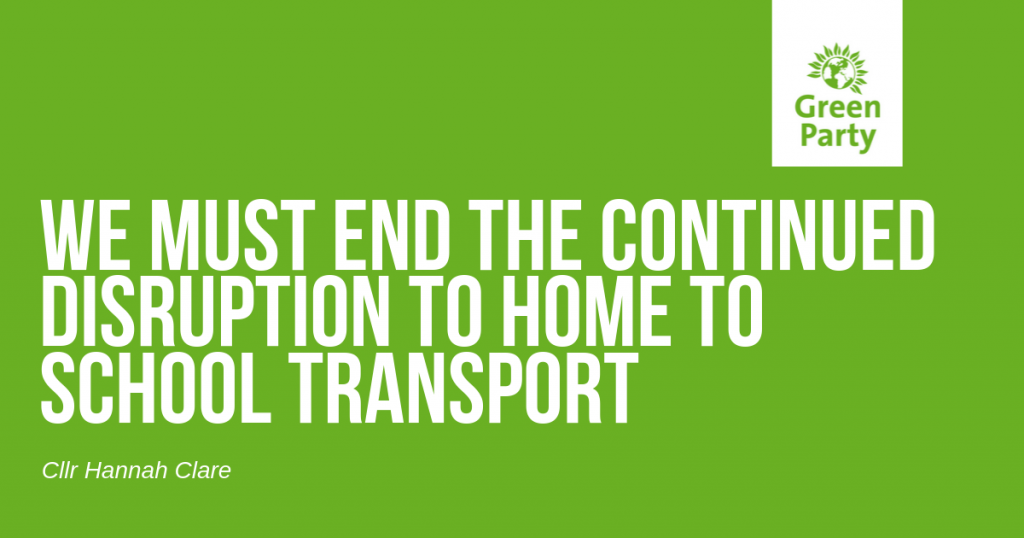 Nearly a month into the school term, and our city’s children with disabilities are still facing huge challenges with their transport to school.

Over the last few weeks, Green Councillors have been contacted by several worried parents about the ongoing issues. And despite seeking assurances from council officers that the current problems will soon end, we have been concerned to hear that they remain – and that new issues are arising.

This week, we’ve heard that pupils at some schools are facing more than thirty minutes wait in their vehicles before they can begin disembarking – due to queues to get in. And we’ve witnessed major impacts on both residents and pupils, as the chaos causes blocked roads and a great deal of havoc to the mornings of parents, pupils, staff and residents alike.

We must consider what has gone wrong

This year’s changes to Home to School Transport have, without doubt, had a considerable impact on many. The Council has a duty to ensure that this is resolved as soon as possible and that this disregard for some of our most vulnerable pupils is never allowed to happen again.

As a party, we agreed to work with Labour on the key issues facing our city; of housing and homelessness, equality and diversity, combatting austerity and our climate emergency. But we also pledged that as the council’s official opposition, we will challenge Labour when we believe they are wrong.

While Steve Bell, Conservative leader, has continued to state his party is the only one to hold the council’s Labour administration to account on Home to School Transport, that is a misinterpretation of the truth. It is vital that all parties consider what has gone wrong for some of the most vulnerable people in our city.

Under Labour, the council committee responsible for families, children and learning has had not one, but five different committee chairs. With four different chairs alone since the period when home to school transport was first discussed in June last year, our concern is that vital details about this crucial contract have slipped through the net. The city deserves proper oversight of this vital issue – and the lack of it has certainly contributed to the ensuing problems.

Greens have raised concerns about the effect this is having on parents – who are not only experiencing a great deal of additional stress, but who are in some cases also missing out on work and other commitments, including respite care time. We have asked for assurances that Disclosure and Barring Service (DBS) checks are now in place for all vehicles, along with the required vehicle safety checks and passenger information sheets. Information from parents suggests that they had been waiting for confirmation that these had been put in place.

It is clear that something has gone very wrong, so we welcomed an inquiry being set up and we look forward to receiving answers to our queries. We hope that the inquiry can be as transparent as possible and take into account the views of all affected in what has occurred this term.

These changes have been partially motivated by a need to reduce the cost of the contract. Greens have continually fought to ensure that the most vulnerable residents in our city should not face the consequences for cuts.

Since 2010, we have lost millions of pounds of Government grants a year. This has caused so many damaging cuts to be made across many council services. We see the effects of this everywhere – from City Clean, which has been cut too hard and too fast – to proposals to cut to violence against women and girls services in this year’s budget.

Brexit will give us further funding challenges – which is why Green Councillors have continued to challenge and address the affects it will have on our city. We will continue to lobby the Government to address the challenges created by cuts and challenge them when they occur.

The Labour Council has failed to provide adequate school transport for vulnerable children. But the reason behind their challenges cannot be ignored. The Conservative Government has a lot to answer for, in how they continue to cut services and budgets – for which the most vulnerable suffer. For Labour’s part, they must explain how they will ensure this does not happen again – and move swiftly to end the disruption still affecting families in the city.