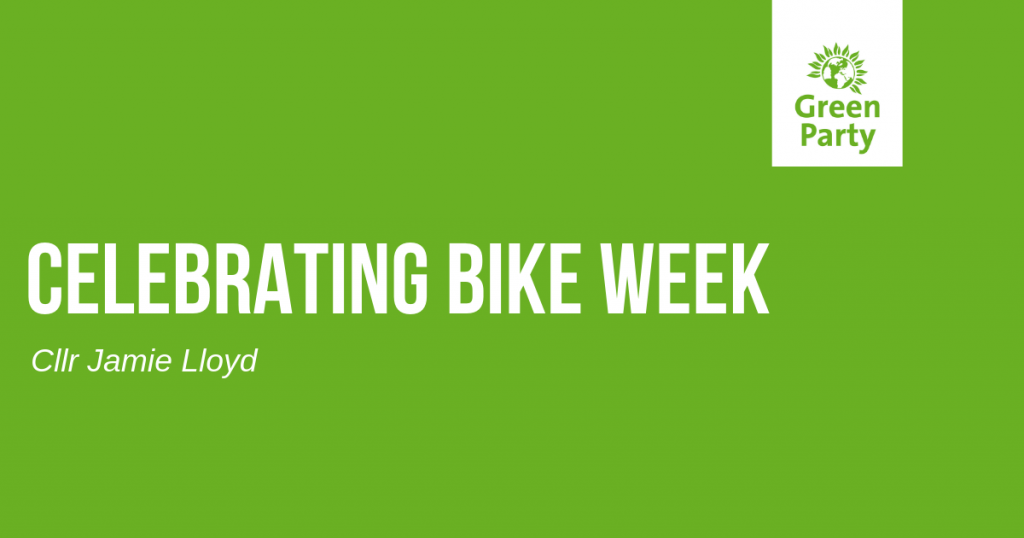 This post has been written by Cllr Jamie Lloyd, councillor for Withdean Ward and member of the Environment, Transport and Sustainability Committee.

This week we celebrated Bike Week, an annual event that celebrates and encourages the use of the bicycles as a form of transport, freedom and liberation.  It is a great event as it promotes cycling as it should be, a form of transport that is eco-friendly, great for health and accessible to virtually anyone.

In recent years cycling has experienced a welcome renaissance in the UK. This growth has been largely within the sports cycling sector, driven in part by cyclists inspired by our Olympic successes as well as from UK cyclists like Bradley Wiggins, Chris Froom and Richie Porte. As a cyclist who will never wear lycra, I am happy to see so many people take it up as a sport and would encourage millions more to do so. But I would love to see this enthusiasm translate to the world of cycling for transport as well.

Sadly, cycling as a form of transport has dropped off in recent years with a slight increase in car commuting. The reasons are obvious. It is still much too dangerous to cycle in so many places in the UK. In many towns bike lanes are either non-existent or sandwiched in between street furniture, scaffolding trucks or in my case in Brighton & Hove, rare Elm trees.

I cycle my two children to school every day and we are in a constant knife edge battle with traffic, noise and pollution. I do not blame any parent who would think this simply too dangerous for their children. I’m saddened by  our lack of a coherent cycle path infrastructure, compared to that of other nations.

In cycling countries like The Netherlands and Denmark cycling infrastructure was hard won; Amsterdam used to be full of traffic but the people made a decision to make their city centre car free. Now it is heralded as a cycling heaven with bikes everywhere and few people even wearing cycle helmets as cycling is so safe in the absence of traffic.

If we are to offer even a glimmer of hope for a sustainable cycling infrastructure we need millions of people on bikes on a daily basis demanding proper bike lanes and car-free urban spaces.

How we inspire change

Until very recently it looked like our decade’s long fight to reclaim urban space from cars was winning, due to the amount of deadly pollutants kicked out by cars, especially in urban areas which made the case for casual driving morally indefensible. It has by no means stopped or reduced it, but it was starting impact on governmental policy and urban transport design.

Recently however we have seen the rise of electric cars with a new generation of drivers many of whom believe that because their car (or huge SUV) is electric  expunges them from any form of responsibility.  While the reduction in localised harmful emissions is welcome (although electric cars do still produce significant emissions from brake blocks and tyre particulates), the reality remains. Cars, be they diesel, petrol or electric take up one third of our urban space and an electric car will cause as much or more mortal damage to me or my children if it hits us at any speed. Roads dominate the space equity of our towns and we have all become complacent in their dominance – we must not let electric vehicles justify and continue this trend and I believe the best way to combat this is by promoting bicycling.

The case for cycling

The bicycle is still the most efficient machine ever made by humans. As we face up to the realities of the climate emergency, we must use technologies with the most efficiency and productivity. The bike fulfils that criteria perfectly and can fulfil a huge part of a sustainable transport mix.

In Brighton & Hove,  I can get pretty much anywhere in 25 minutes and most places much quicker. This is without cost, waiting around at bus stops or sitting in traffic and with considerable benefits to my health and wallet. I was amazed when getting a new job recently to hear able-bodied colleagues discussing the merits of a discounted bus pass, in a town where a cyclist of virtually any fitness level can be anywhere in less time than they would wait for a bus!

So Bike Week offers a great opportunity for anyone to get back into cycling or take it up maybe for the first time, there are hundreds of events and activities going on up and down the country that are well worth checking out. In East Sussex we have an Active Travel competition running now which offers great prizes if commuters simply switch to cycling or walking into work http://eastsussex.getmeactive.org.uk.

People that take up cycling as a form of transport rarely give up or go back to driving, the benefits in terms of time, health and money are so great that people almost always notice a huge difference in their quality of life within days.  HG Wells once wrote: “Whenever I see an adult on a bicycle, I do not despair for the human race” poignant words that resonate particularly today as we face an unprecedented climate emergency.