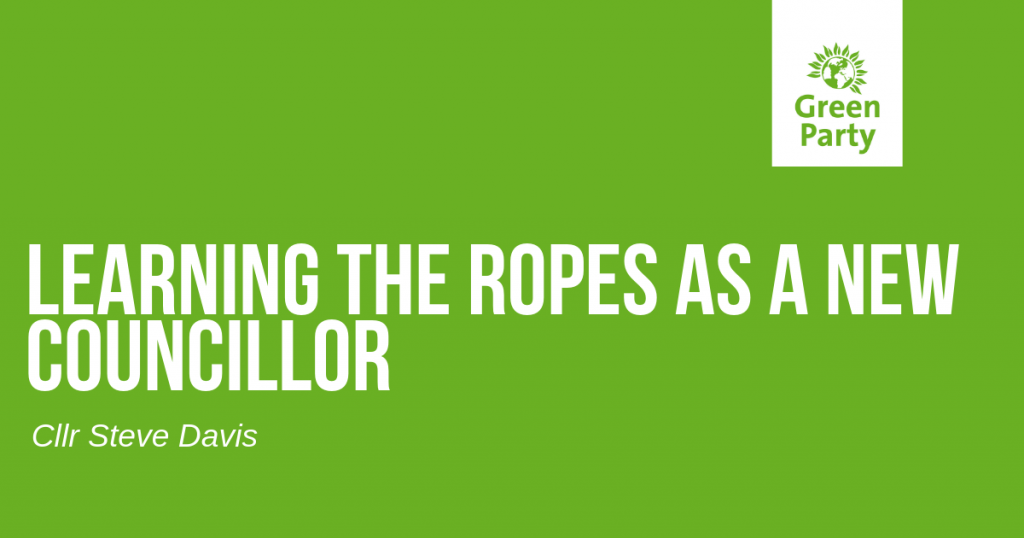 This post is written by Cllr Steve Davis, Councillor for Withdean Ward.

The story of a new councillor can only start in one place. The moment the returning officer reads out the results of the election and you realise that the next four years of your life are about to change immeasurably.

At this point the months of fervent campaigning and canvassing in my ward had physically left their mark; the blisters from pounding the streets and the bruised knuckles from the thousands of doors knocked were my badge of honour. But as the vote tally was read out, the exhaustion was replaced by sheer joy.

I had a vague idea of the number of votes needed to be successful. As I heard the totals being read out, I knew that all that hard work had paid off. Yet nothing could prepare me for the realisation that my community has given me their trust to represent them.

Our current political climate has led to trust and respect in politicians falling dramatically. I believe local elections should be, and have been shown to be, the place to revive it.

As councillors we have a unique, personal perspective on the views of the public and a responsibility to listen to their concerns and wishes. As councillors it’s our duty to try and improve the wards we represent and the cities we serve.

From a personal perspective, I felt an incredible sense of democracy in action. In Withdean, we unseated three Tory councillors. This meant us taking all three seats in a ward that in its history had only ever seen one councillor that wasn’t wearing a blue rosette (my colleague Sue Shanks, from 2011-2015, now a Green councillor in St Peter’s and North Laine ward).

Over the years, I’ve delivered leaflets, campaigned and canvassed in elections for our other amazing greens such as my MP Caroline Lucas. But it hit me that I’m now more than simply a member of a party with values I agreed with; I’m now a councillor.

As the jubilation of my success passed a little, the process of induction began. Like any city, Brighton and Hove is adept at giving as much information and assistance to its shiny new councillors as possible.

As soon as I stepped off the stage the process began. Jamie, Sarah (my fellow Green councillors) and I had a brief interview with the press and were handed an introduction pack from the council full of dates and times for the many induction and training courses.

Still, my head was spinning with the thought of all those residents standing in polling booths putting their marks against my name. I thought about all the conversations I had while door knocking and the multitude of topics people voiced when asked their thoughts. Four years may sound like a long time but I could literally hear the clock ticking from the moment I knew I’d been elected.

The whole process is cemented at the first full council meeting, especially if you are a newly-elected councillor. Sitting councillors are already in the chamber and your name is called to enter. We were greeted by the outgoing Mayor and then walked over to the opposition benches to take our seats; the sense of pride and achievement as I made that brief walk was beyond measure.

As I took my seat and looked around at the names of previous Aldermen and Mayors from centuries past I felt honoured to be part of the running of this glorious city.

Balancing the weight of Tory austerity

The life of the councillor over the next few years will be an arduous trip, as the full weight of Tory austerity has yet to fully hit our incredible public services and local budgets. The fall-out from looming Brexit disaster brought upon us by the utter shambles of a Tory government could bring pain for generations and make running such an incredible city a very difficult proposition.

In Brighton and Hove, we now take the seat of the official opposition, with just one councillor less than the ruling Labour administration. We’ve committed to working with them on key issues that matter, but we will still hold them to account in the manner our city deserves.

But for one afternoon in May, this new councillor felt proud to take his seat with his Green Party colleagues, surrounded by like-minded people who the residents of the city gave more of their votes to than a combination of the others on offer. I’m more than ready to represent them.