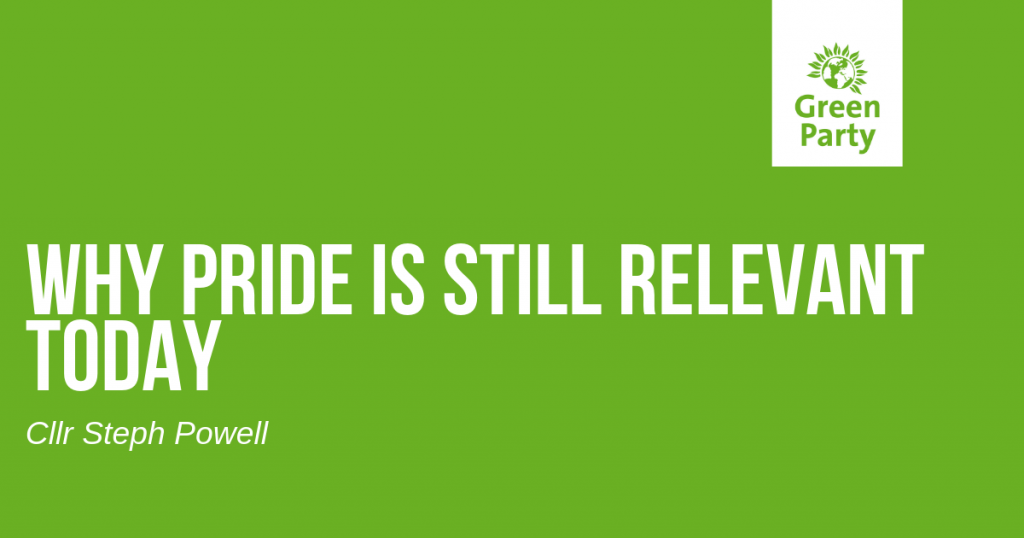 This post is written by Cllr Steph Powell, Councillor for Hanover and Elm Grove Ward.

Every year in June we celebrate Pride month. We do this to remember the Stonewall riots which occurred in 1969, which happened in response to a police raid at the Stonewall bar in New York. From that moment the gay, or (now referred to as) the LGBTIQA+ movement began. In London, the first Gay Pride took place in 1972 with a small yet significant gathering of some 2000 people. Pride has now evolved into a massive, glittery celebration held in many cities across the world. And none so much as here in Brighton & Hove.

On the weekend of 3rd August 2019, our city’s streets, bars and businesses will be decked out with the rainbow flag, which will notably also fly proudly above the town hall, the police station, and various other civic buildings. It will be a carnival air of fun, partying and flamboyance in all its wonderful glory. It is truly a magnificent weekend, and arguably the biggest event in the city’s calendar.

Why we’ve still got work to do

Despite wins for LGBTIQA+ rights in recent years, we still have a way to go. A friend recently remarked that “But you have equal marriage now don’t you?” as if that feat alone had dispensed with all the discrimination towards LGBTIQA+ people! Sadly, even in modern Britain that’s far from the truth.

Despite legislation in the form of the Equality Act, 2010, and equal marriage in 2013, LGBTIQA+ people can still expect to face prejudice just because of who they are. A Stonewall poll in 2017 stated that 2 in 5 Trans people, and 1 in 6 cis-gender LGB people had experienced a hate crime in the last 12 months. It went on to state that 4 in 5 LGBT+ people didn’t report it. Furthermore, if an LGBTIQA+ person belongs to another marginalised group, that they are then even more likely to be victims of abuse.

Research also shows that globally, there are around 70 countries where it is still a crime to be LGBTIQA+. This means that in those countries you could be imprisoned or even put to death simply for being who you are; for being part of the LGBTIQA+ community.

Only this year in 2019, have we have read about the persecution of gay men in Chechnya, and in Brunei, where a law was implemented to stone to death LGBTIQA+ persons. Sadly, it appears that despite the good things that have improved the rights of LGBTIQA+ people, we are far from full equality.

What have the Greens have done to promote LGBT+ rights?

The Greens’ stance on LGBTIQA+ rights has been, and continues to be unequivocal. Darren Johnson, former London Assembly Member, first proposed a register for civil partnerships. This was a watershed moment for LGBTIQA+ rights which led to the changes we then saw.

Caroline Lucas MP has been a passionate advocate for LGBTIQA+ rights: she voted for same-sex equal marriage in 2015; she spoke out against the NHS cuts which could affect HIV treatment; and much more. Our policy as a party on LGBTIQA+ rights is vast.

As a Councillor on Brighton & Hove between 2011- 2015, I’m proud of the many things that we achieved as the first Green council. Crucially, we were the first council to roll-out the Trans Scrutiny; an extensive piece of work which stretched over 3 years. During this, the council and councillors worked together with local LGBTIQA+ charities, the NHS, various groups and individuals, who put together a large number of workforce recommendations from their findings. This included, amongst many other things: the Trans Inclusion school kit, accessible gender-neutral toilets, and Trans Inclusive swimming classes.

Somewhere over the rainbow… Pride still has its place

Pride to me is without doubt today, an important event in the city’s calendar. It is a wonderful weekend to celebrate our diversity, and to realise how far our LGBTIQA+ rights have come.

But it’s also a time to remember that those rights are sadly not shared by everyone in our global community. With the world political situation in turmoil, paving the way for far-right leaders like Trump and Bolsonaro, we should never ever take the rights that we have now, for granted.

We must for a moment, extend our deep gratitude to those who went before us – brave people, who stood up to discrimination, and whose campaigning brought about the protections that we have in the UK today, to allow us to live freely, and to be who we are. Hopefully one day, those rights will be extended globally to all the LGBTIQA+ community.

So, with this serious message in mind, it leaves me to invite you to come to Brighton and Hove on the weekend of the 3rd August 2019 for Pride. Come and be a part of the celebrations, and enjoy every minute of this happy, inclusive and wonderful day.