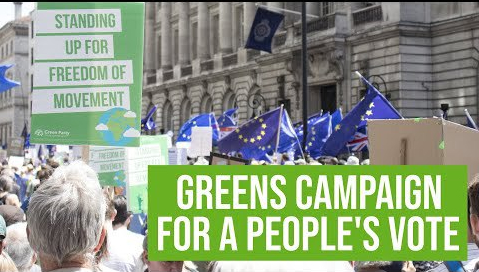 Thousands of Brighton and Hove residents have signed a petition calling for a ‘People’s Vote’ on any Brexit deal.

“The government and parliament were given a mandate to negotiate a Brexit deal for Britain. However, they have no right to impose a final deal. The people must have the final say on whether or not to accept the proposals on the table.

“We, the undersigned people of Brighton & Hove, call on the Government to allow the people the chance to have our say on the final terms of the Brexit deal negotiated with the EU, including the possibility that no deal may have been reached.”

The petition is still open and is available to sign:
https://action.greenparty.org.uk/bhgp-eu-petition

The request of the petition will now be heard formally at a meeting of Full Council on 18th October, after the number of signatories received reached 1,399 – exceeding the threshold required to trigger a debate in the council chamber.

Nationwide support for a People’s Vote is estimated to have grown steadily since the EU referendum. Polling shows that more than 100 constituencies which previously backed leaving the EU would now vote to remain. A YouGov poll of trade unions GMB, Unite and Unison also found that a majority of union members are in favour of a People’s Vote. Brighton and Hove City Council became the first in England to formally endorse a call for a ‘People’s Vote’ after a proposal from the Green Group of Councillors.

At the next Full Council meeting (October 18th), Councillors will also vote on Green proposals demanding a thorough investigation into ‘the impact that Brexit will have on Brighton and Hove and its council services.’ Green Councillors fear that the risks posed to the city and council services by leaving the European Union have to date not been adequately assessed. Recent reports have suggested that around 250 local projects could stand to lose EU funding after Brexit.

“The reaction to this petition on the doorsteps of Brighton and Hove has been phenomenal. People are exasperated and demand a say on the Brexit deal. With less than six months to go until ‘exit date’, residents have no sense of what the future holds. They have been frozen out of the debate – and worse still, told bare-faced lies about issues as crucial as extra funding for our NHS. The Conservative Government and Labour Opposition are equally divided over what, if any, ‘plan’ will be in place and what it should say.

“Greens have been clear from the outset that a ‘People’s Vote’ on the final deal is needed – we have led the way. We will also join the thousands expected to march in support for a People’s Vote in London on 20th October. Putting the deal – or no deal – to the people is the only way to reconcile the divisions of opinion between Parliament and the nation and prepare us for whatever future we face together.”

“The gap between national politicians’ words and reality has never seemed greater than during this damaging Brexit paralysis. The logical, moral and democratic way out of this Conservative-created morass is to hold a People’s Vote. We were the first Council in the country to call for this almost a year ago and demands for a People’s Vote are now coming from all sides.

“Of course we still don’t know what’s going to happen and Greens are very concerned about the immediate and longer term impact of any form of Brexit on the country, and on our city. We think there’s more we could do to prepare the city and the council itself for the worst scenarios. Other coastal towns have seen local acceptance of the Euro currency and we think this idea could be assessed by businesses and also by our council to see if it makes financial sense.”

The ‘People’s Vote March for the Future,’ will take place on 20th October in central London. https://www.peoples-vote.uk/march

Councillor Phélim Mac Cafferty also tabled a question on the subject of Brexit to a meeting of Policy, Resources and Growth Committee, 11th October:

“[…] Will the Chair of the Committee urgently write to the Chancellor of the Exchequer, Secretary of State for Housing, Communities and Local Government and Secretary of State for Exiting the European Union asking them to share with the City Council the assessments their departments have written about how the city and the region’s economy will be affected by Brexit; what assurances their departments will give to residents that everything is being done by their departments and the government to mitigate risks to jobs and livelihoods; and that in the absence of such mitigation that they will aid and compensate city residents whose income is lost through Brexit.”

Chair of the Committee, Cllr Dan Yates, agreed to the request.