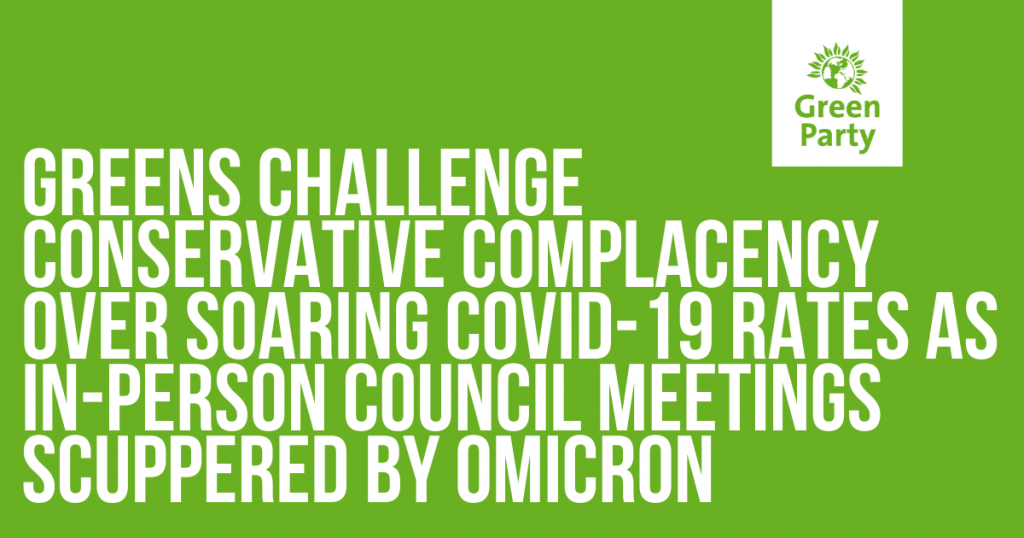 Green Councillors have hit back at Conservatives for refusing to prioritise public health as Brighton & Hove follows other councils cancelling in-person meetings in the face of Omicron.

Green, Labour and Conservative leaders previously lobbied the government to reintroduce legislation that allows council meetings to happen virtually, as they did throughout the pandemic. However this legislation has been revoked, meaning that decisions that are to be made by councillors still have to be agreed through a meeting held in person.

Conservative councillors had been encouraged to voluntarily reduce attendance to help reduce risk at any in-person meetings, as Labour councillors, Greens and independents had agreed to do, but Conservatives refused.

Following a press conference led by the Prime Minister yesterday, and the advice of the Chief Medical Officer to reduce contacts before Christmas, the strong advice given to councillors by Brighton and Hove’s public health team and Director of Public Health has been to reduce risk by deferring in-person council meetings, as cases of Covid-19 continue to soar. They are now at the highest point since the last national lockdown in January 2021, and several other councils across the country have cancelled meetings, including Conservative-led Kent County Council.

“Cases of Covid-19 are now at the highest point since January 2021 while Omicron is doubling every two days. It’s ironic that the Conservatives have branded a public health decision ‘cowardly’ when in spite of the warnings, it is Conservatives who have ignored the risks, failed to plan ahead to keep us safe, avoided taking precautions and insisted on putting public health at risk. The legislation that allowed council meetings to take place online was revoked by Conservative ministers, causing outcry at the time, even among Tory council leaders. Because formal decisions must now be made in person, many councils are now cancelling meetings altogether.

“In Brighton & Hove, to ensure members of the public and councillors can still ask questions, we’re holding an online public engagement session so that people do not have to physically attend. This is a basic, sensible precaution, but it is not allowed when it comes to the decisions required by a meeting of full council.

“We held several detailed meetings, had been preparing for all eventualities and had suggested alternatives. We encouraged local Tories to take the approach of both Green and Labour councillors, who agreed to voluntarily reduce attendance at the council meeting to help reduce risk. Yet the Tories refused.  For all their claims of democracy, we’re dealing with a party that puts itself before all others – even in the face of a deadly virus. While our city and country stands on the precipice of another public health disaster, it has suited the petty interests of the Tories to drag us into a potentially unsafe meeting  – and had they had their way  – to keep people in a room for as long as possible, as well as position themselves as the majority party of council.

“It’s right that today’s in-person meeting was cancelled. Similar to several councils across the country- from Sheffield, Kent, Lincoln, Hereford, Liverpool, Cambridge to Greenwich, we are taking the advice of public health experts seriously, so we can support our community through this crisis. It is a shame, but perhaps not surprising, that Conservative councillors do not agree that we have to do everything possible to reduce onward transmission, protect our NHS and reduce the chances of Covid-19 spreading even further in our city.”

“How dare Conservative councillors talk of a nail in the coffin when this action is precisely needed because people are dying of Covid at an increasingly alarming rate, thanks to their own government’s failed response. This latest dismissal follows Tories arguing against  basic protections like wearing masks, making misleading claims about vaccine hesitancy in ‘Green wards,’ and urging council services to ‘get back to work’ despite a recent order from their own government to work from home; it is clear the Conservatives don’t take the pandemic seriously.

“It is of course disappointing that the Covid-19 crisis has ballooned in this way leaving so many anxious about the upcoming festive period, their health and that of their friends and relations. But this is because time and time again we’ve been left to pick up the pieces of Conservative ministers failing to plan ahead or heed warnings. They revoked the legislation that allowed councillors to hold meetings online, and they’ve also failed to protect our community from Omicron.

“Given the Conservative party simply cannot be trusted on safeguarding our health, we will continue to lobby for the return of legislation allowing virtual meetings so that everyone in our city – regardless of their vulnerability to this virus – can participate fully in council meetings.

“We need to fight Covid-19 and support people heading into an incredibly difficult winter – and frankly, democracy won’t function if we favour the well above the sick. We refuse to ignore the warnings of our own local public health experts and of those nationally. We need to protect the NHS, prevent onward transmission and keep as many people as safe as possible as we face down the huge threat of Omicron.”