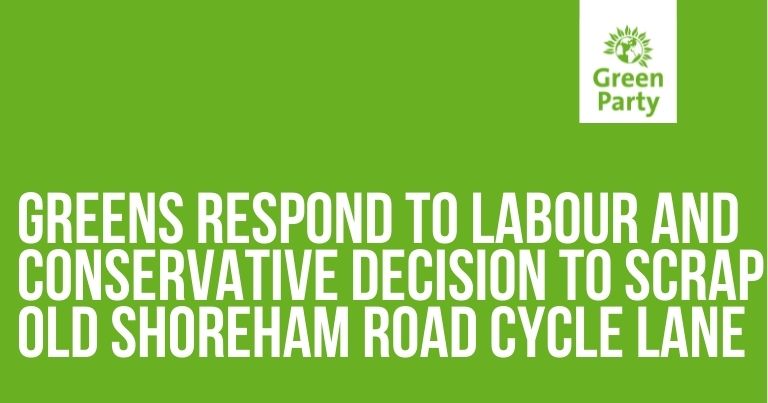 “Despite important warnings that this will harm council funding, public health and some of the city’s most marginalised residents, we are dismayed to see Labour and Conservative councillors work together to remove the new safe cycle lanes on Old Shoreham Road.

“Instead of working constructively to support making journeys by physically active means, such as cycling, Labour and the Tories have remained fixated on removing a lane already in use by communities. This will be to the detriment of young people cycling to school from September and some of the city’s poorest communities who have had safer, cheaper transport options snatched from them.

“It’s particularly disappointing to see the promise of new investment in our city, including jobs, put at risk by the Labour group, given they have previously campaigned with us to demand government funding for our city. With huge issues at stake, like our recovery from Covid-19, and after a decade of Conservative government cuts, short-term decisions which will defund Brighton & Hove are deeply irresponsible.”

“They also stand on the wrong side of progress. 35% of those cycling down the Old Shoreham Road had previously travelled the route by car – and switched to a bike once the safer route was introduced. In the face of a climate crisis and public health emergency, it’s fantastic that so many of our residents are taking up the opportunity to cycle or walk. This also leaves the roads less congested for those who need to use a car.

“That’s why we continue our work to make sure everyone can safely travel around our city. We’re pleased that active travel improvements on the A259, A23 and Western Road are underway, building on the new lanes installed on Madeira Drive, and we’ve seen that pedestrianisation continues to encourage more people to visit and enjoy spending time at our local businesses.

“Yesterday’s UN climate change report was unequivocal: ‘the role of human influence on the climate system is undisputed.’ Yet today, local positive action to prevent further climate breakdown has been thrown out by Labour and Conservatives.

“In the face of this, and the vital work needed to recover from the pandemic, we will always put the safety of Brighton & Hove residents first. From active travel to support for jobs and communities, Greens are focused on how our city can thrive.”