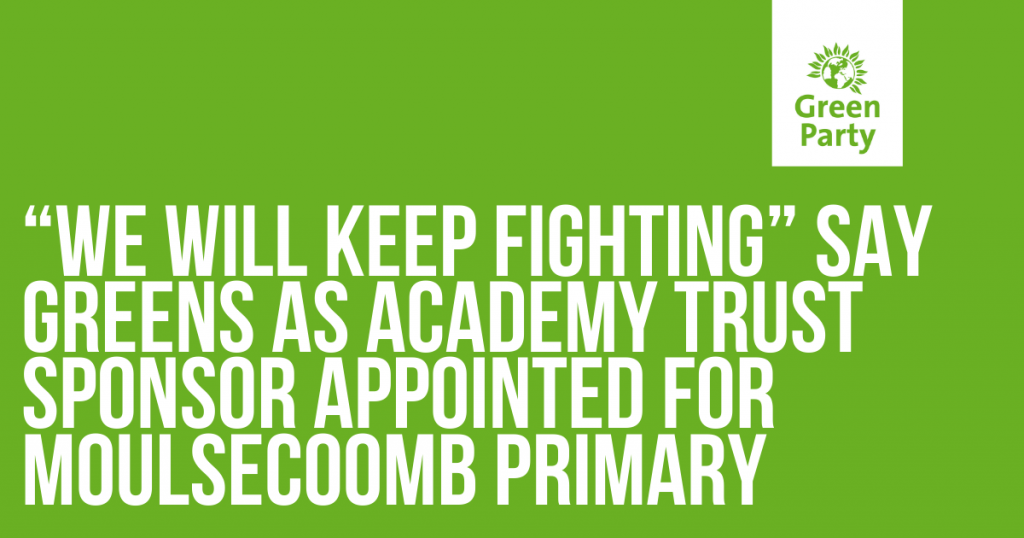 Greens stand with campaigners, staff and unions to reject takeover by Pioneer Academy

Greens have vowed to continue the campaign to fight the conversion of Moulsecoomb Primary into an academy after a sponsor was announced today.

The government’s Department for Education has appointed Pioneer Academy as the sponsor for the school, despite strong community, union and council opposition to government academisation plans.

Greens say the announcement represents a ‘significant failure’ by government officials to grasp the community support for Moulsecoomb Primary. The Pioneer Trust has no connection to other schools in the city, with the nearest primary 27 miles away – and use two ‘regional directors’ to oversee the 11 primary schools under their control.[1]

Staff continue to take strike action in response to the forced academisation, with the next date for strike action occurring next week. Ofsted inspectors recently praised Moulsecoomb Primary for its work to support pupils during the pandemic, commending staff for supporting vulnerable pupils.

“The fight to prevent the forced academisation of Moulsecoomb Primary is far from over. This latest announcement only confirms how out of touch government decision makers are with the needs of the community and the clear, vocal and evidenced wishes of the school, staff and pupils.

“Moulsecoomb Primary is a community school, well rooted in the local area and with a strong understanding of local need. The school works hard to address disadvantage and support vulnerable pupils – work Ofsted has commended. In stark contrast, the Pioneer Trust’s ‘vision statement’ makes no real mention of addressing disadvantage, and run 11 schools on a ‘top down’ basis, none of which are based in the local area.

“Moulsecoomb Primary already has the staff, community, council, union and parent support it needs to keep going from strength to strength – something the Pioneer Trust will never be able to match. We will keep fighting this decision all the way.”

The council’s Children, Young People and Skills Committee will be meeting next Thursday (29 April) to discuss holding an additional parental ballot about academisation. The previous ballot results indicated 96% of parents were against an academy takeover.