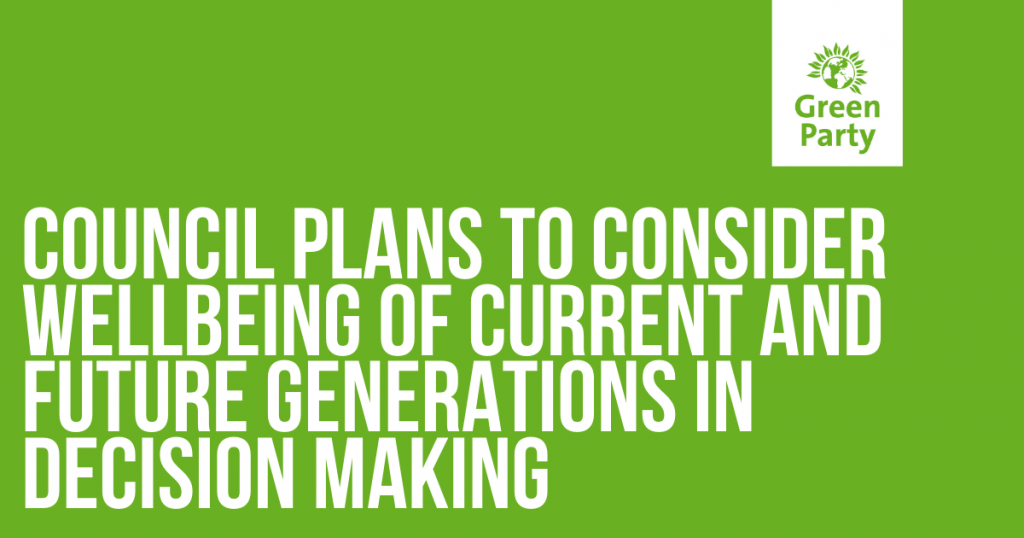 Councillors can do more to consider the impact local decisions are likely to have on future generations, Greens have said today, referring to the ‘Future Generations’ Act already adopted in Wales.

In the year that world leaders will meet to discuss climate change targets at the ‘COP26’ meeting in Glasgow, councillors say that now is the time to consider the impact decisions will have on generations facing climate chaos, and other crises, both at a local and national level.

The Welsh Act requires decision makers to review how current policy plans will help to achieve future goals– such as to bring down carbon emissions. Expressing support for a UK-wide Future Generations Bill in Parliament, Greens argue that the requirement – or statutory duty – placed on Welsh councils to consider the wellbeing of residents represents a vital way to hold decision makers to account.

In a set of proposals being put forward by both Green and Labour Councillors, the council’s Policy & Resources Committee will debate commissioning a report into how evidence of the needs of future generations could be considered in local decisions, using the Welsh Act as a model.

Councillor Alex Phillips, who will put forward the proposals said:

“Scientists have already warned us we have until 2030 – less than ten years – to avoid the worst of climate chaos. Perhaps this fact is now repeated so often we are in danger of dismissing it. But it is a stark warning.

“We are already feeling the effects of global heating, extreme weather events, flooding, and air pollution, of a failure to prevent deepening poverty and inequality. We already have clear evidence of what will happen if we fail to take action now; on issues such as child poverty, or on carbon emissions, or reducing waste – and we know that policy we make today will shape the world that younger generations grow up in.

“This is about more than just our climate – it’s about how we create a better future across the board. As the pandemic has shown, as well as the feedback of residents taking part in the city’s first climate assembly – we need to plan for a better future. This means considering how policies can help to achieve not just our current, but also our long term goals for more equitable, sustainable communities. The Welsh ‘Future Generations’ Act serves as a template, and we hope to be able to assess how its principles can be utilised here.”