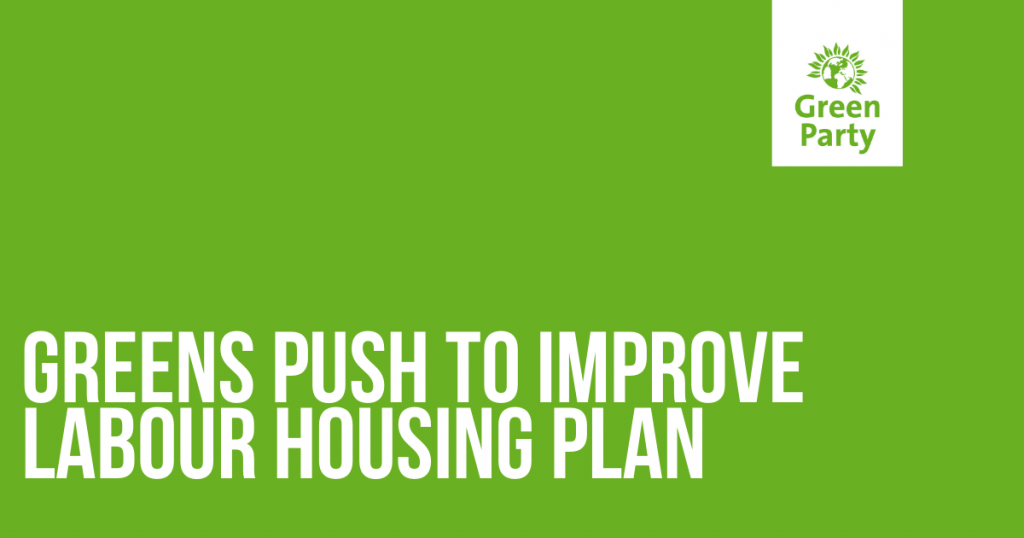 Greens submitted amendments to better protect open space (known as the ‘urban fringe’) by increasing building on brownfield sites in the city. However these proposals will not be put to the vote because they are deemed “unsound,” as they do not support the aims of the Conservative National Planning Policy Framework (NPPF). The framework contains key clauses which make it all but impossible to oppose the building of homes.

These would introduce requirements such as 100% affordable housing, stricter environmental conditions and ecology studies on ‘urban fringe’ land. These were ruled as incompatible with national planning rules.

A summary of key Green amendments is listed below

Green Councillors have consistently criticised national planning law, labelling the NPPF a Conservative Government ‘developer’s charter,’ that forces councils to grant permission to developments, regardless of their suitability or affordability, in order to meet strict national targets for housing development.

Three years ago these same planning rules were explored in a report from Shelter, with the report concluding that attempts to protect developer profit, such as viability assessments, contributed to 79% fewer affordable homes being built.

Greens also criticised the Labour Council for failing to consider alternative sites for housing development in order to ease pressure on the urban fringe. A number of new sites, such as above car parks and shopping centres, were identified in the Green consultation response submitted in 2018 but have not been incorporated into the final housing plan.

With opposition parties only granted limited amendments, Greens have called on all parties to ensure that the local plan goes as ‘far as possible’ to safeguard local communities against the worst of NPPF restrictions, and ensure the highest possible standards in development.

Councillors are due to debate the City Plan on 23rd April and Greens have urged all parties to improve the city plan, saying that the council must do more to ensure housing developers address both the housing crisis and environmental emergency.

“Two years ago, at consultation stage, Greens made our feelings on the city plan clear. We asked for the plan to include the strongest community commitments, working to increase community-led, genuinely affordable housing, instead of giving free reign to developers: many offer paltry levels of ‘affordable’ housing. We called for stricter environmental studies and research to both protect and secure the environmental status of urban fringe sites. We also identified additional housing sites that could be used without encroaching on green space in the urban fringe, for example above car parks and retail spaces.

We have remained consistent on these issues but we have lost the argument that these strict requirements can be included in City Plan Part Two – thanks to the restrictive demands of national planning law that puts developer profit before community need. We have been told we cannot introduce tougher policy for our city than the national planning rules allow.

“We have shared the rejected proposals that will not be debated as a result of planning law restrictions, alongside the Green amendments that will be debated, so that residents can see the impact that government planning law has on our city.

“Where the plan can be improved, we have pushed to strengthen it wherever possible. We are calling for greater carbon reduction in new developments, stronger commitments to air quality, and increased ‘car free’ pedestrian and cyclist access to all new housing schemes. We are also asking developers to prioritise protecting the natural environment on development sites, instead of choosing to ‘off-set’ the impact of their construction elsewhere.

“We have also pushed hard for stronger pledges on community-led housing, on affordable housing and inter-generational housing, too, and stronger protections for the many retail spaces in our city that allow small independent businesses to thrive.

“The Labour Council failed to pick up on some of our positive proposals when raised two years ago. The NPPF sets a low bar for developers – but within these constraints, where the plan can go further, it should. Every opportunity must be taken to ensure that developers work harder for our communities and for nature.”

“It has been outrageous to watch the local Conservative party rage against its own government’s planning rules by talking about a vision for green space, when the Conservative party’s own laws say that green space is up for grabs by developers. Since the introduction of the damaging and short-sighted Conservative planning laws, 9 years ago, Greens have consistently opposed them.

“We have seen really significant pressure put on councils recently to comply with government edicts on housing. South Oxfordshire district council were due to adopt a plan for local housing which rejected government rules – and they were threatened with the prospect of having their planning powers taken away from them entirely as a result. We were elected by our local communities to stand up for their interests, and we cannot risk seeing local decision making thrown to the wayside by failing to secure the best city plan we could in the circumstances. So Greens have pushed hard to improve Labour’s plan – but we are naturally disappointed not to see more of our strong proposals adopted.

“On the other side of the pandemic, we will continue to lobby ministers to give our communities a real say over their own city.  Government must decentralise more of the decisions about planning to the elected representatives of our area who understand it best, so that decisions can be taken freely that benefit people and communities, not only developers’ interests.”A

33 Green proposals that amend City Plan Part Two include such measures as:

Green Councillor Marianna Ebel has also commented on the amendments that were classed as ‘unsound’:

“We aimed to maximise the development on brownfield sites – e.g. by attempting to increase the minimum number of dwellings at the old Brighton General Hospital site from 200 to 300. This was rejected due to concerns about the conservation efforts. We’ve already mentioned the attempt to get additional housing on top of car parks & retail space. This is not only an attempt to increase the number of housing units but could also protect some urban fringe sites if housing demand could be satisfied by being smart about how to maximise brownfield site space. However these requests were rejected as ‘unsound’ when measured against national planning law criteria.

“We demanded repeat ecological studies of urban fringe sites and stated that if housing must be built on the urban fringe as required by planning rules, only 100% affordable housing should ever be permitted, in consultation with the local community first. This was rejected as not in line with CPP1 and the NPPF. National planning law states we must deliver more housing sites.

“We asked for more community engagement – especially to protect pubs – and where this is not possible to create additional space for community facilities (e.g. meetings spaces for local groups). This proposal was classed as ‘unsound.’ We also called for stronger principles to protect Music Venues (known as ‘agent for change,’) and we hope to receive assurances this approach will be upheld in the plan.

“We asked for more areas of the city to be added to the list of important local shopping and retail parades which would have given them a layer of extra protection. But apart from Preston Drove all our suggestions were rejected as they didn’t meet the requirements and definitions set out in planning law.

“We aimed to make Transport Statements and Assessments and subsequently Air Quality Assessments mandatory – not just within the air quality management areas but in the whole city. Poor air quality causes many pre-mature deaths in our city. However this was ruled unsound as it does not align with the requirements of National Planning Policy.

“We asked for the introduction of tighter building controls and more eco-friendly building materials. Some of these were taken onboard; but others weren’t (e.g. developers having to consider the ‘embedded carbon footprint’ of a new development to get a true picture of its impact such as through measuring the carbon footprint of constructing the building itself, and the materials used, including processing and transport).