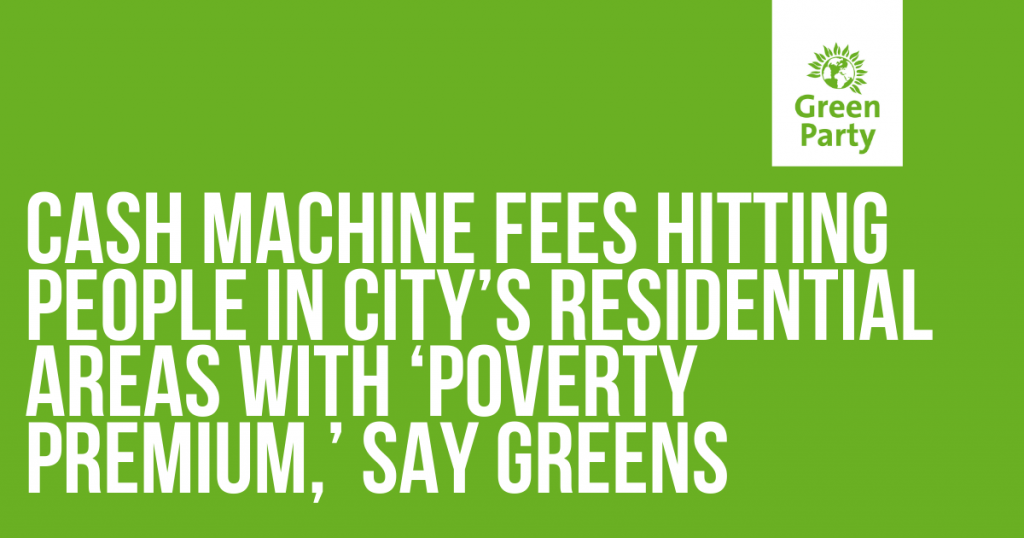 The council must do more to support residents who are forced to pay fees at the nearest available cash machine, say Greens, who have called on the council to explore how to prevent financial exclusion in the city.

Councillor Martin Osborne, Green Councillor for Hollingdean and Stanmer, says that too often people living in more residential parts of the city or in lower-income areas struggle to access free financial services – such as cash machines (ATMs).

In a letter to the council’s Policy and Resources Committee, Cllr Osborne says that many residents, including in his ward of Hollingdean and Stanmer and at the Coldean and Bates Estate, are being ‘unfairly punished and financially excluded’ through a lack of access to free cash points.

Greens say these fees and charges represent a ‘poverty premium,’ where residents living in more deprived areas also end up paying more as a result of limited access to services such as banks and shops, free cash points, or free financial advice.  Greens have also raised concerns that the trend for ‘contactless’ or cashless payments risks leaving those more likely to rely on cash, such as the elderly, more excluded. The letter from Cllr Osborne also refers to the introduction of charges at cash points in Brighton Railway Station, the first point of arrival for many visitors and tourists.

Pointing to new funding opportunities available to install free-to-use ATMs in ‘cold spots,’ Greens say the council must do more to support those excluded from financial services.

“Whereas in some areas you barely have to walk 50m to get to the nearest ATM, many which are free of charge, in other more residential areas you struggle to find even one, and if you do – you face a charge to get your own money out. Above all else, the fact that people are unable to access free financial services, including local ATM machines, is unfair and highlights the inequality that exists in our city. Too many are excluded from financial services – such as access to banks, access to credit or access to financial advice.

“Overall, it is estimated that the average low income household will pay out an extra £490 in additional charges on products and services. Worse still, for some people this figure can rise to as much as £1,190. This ’poverty premium’ is a cruel, unnecessary charge on some of the poorest households.

“Greens call on the Labour Council to do more to support people in this position in the city, working with supportive local organisations such as the Credit Union, Moneyworks and Citizens Advice.  On top of lobbying for more support, councils also now have the opportunity to bid for money to improve accessibility of free cash machines in areas that need them – thus reducing at least this punitive charge.

“We urge the Labour Council to take every opportunity to lessen unfair fees and charges. Given rising levels of poverty and food banks, locally we must also renew focus on the financial inclusion strategy introduced by the Greens, to look at what more the council can do to address this problem.”