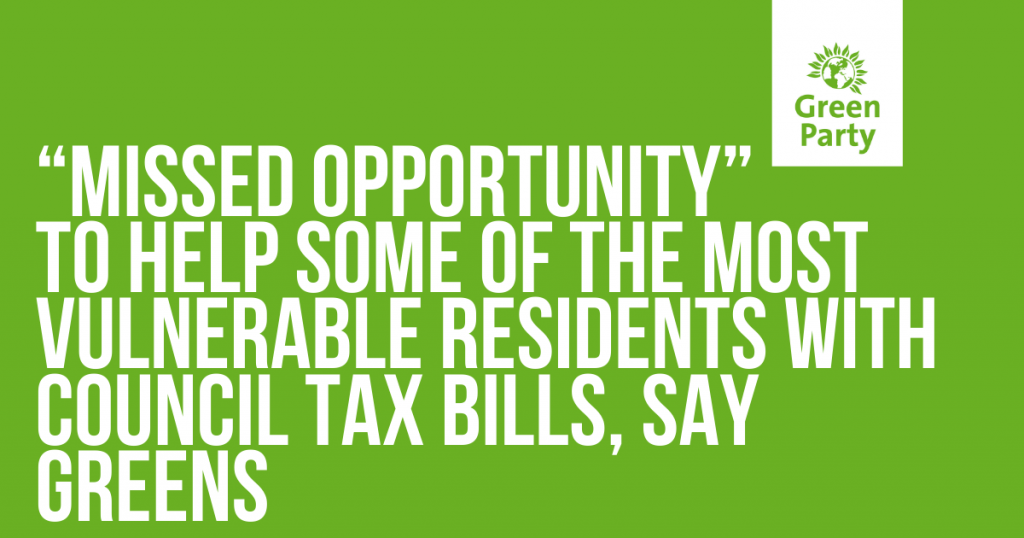 Greens have expressed disappointment than an anticipated review of Council Tax costs for poor households will not go ahead, despite the city council agreeing proposals that called for a consultation with residents.

Each year, councils can consider whether to revise the Council Tax Reduction Scheme (CTR), which helps people on low incomes with their bill. CTR replaced the previous system of Council Tax benefit, and under CTR, rates of support are now set by local councils.

In July of this year, Greens asked the Labour Council to review the options for improving the CTR scheme at a council meeting in July 2019. As part of the Green proposals, councillors also agreed to promote a consultation with residents on Council Tax, in order to better understand how the bill affects people living on low incomes.

However, news that no changes will be made to the level of support offered to those struggling to pay Council Tax has been met with dismay by the Greens, who say a failure to consult is a ‘missed opportunity to support some of the city’s poorest and most vulnerable residents.’

Convenor of the Green Group, Councillor Phélim Mac Cafferty, who had put forward the proposals to a meeting of Policy and Resources Committee, commented:

“The claim that ‘austerity is over,’ is far from the case. Across our city, people on the lowest incomes face skyrocketing housing costs, fuel bills and punitive welfare benefit changes. Two in three households in the city on Universal Credit are now in rent arrears, and face cuts to their welfare payments if they owe other bills such as Council Tax.

“In the face of punitive austerity policy, we asked for a consultation to understand how people on low incomes could be better supported, backed up by a discussion on promoting the council’s funds for those who need extra help with housing costs.

“Once again we have been denied the opportunity to offer more support to vulnerable residents this year. Sadly, this is not the first time we have had our calls for a consultation rejected. Last year Greens called on the council to adopt a fairer ‘Council Tax Protocol’ developed by national organisation Citizens Advice – because we recognised the need to support residents in vulnerable circumstances. We say that as long as the poorest households bear the brunt of cruel austerity policy, our council must do everything in our power stop further debt due to Council Tax.”

“We need a consultation because we need to understand how the cost of this bill is affecting some of the city’s poorest residents – particularly those on Universal Credit.

“Despite receiving support for our proposals to review the scheme in committee, we are angry to discover that no such consultation has been undertaken, leaving us once again without the capacity to offer more support through the Council Tax Reduction Scheme.

“Obviously we welcome future planned work by the council to better support those on low incomes. However, not consulting is a missed opportunity to support some of the city’s most vulnerable residents. Greens won’t give up and will be looking at other ways of easing the burden of council tax for those low income households most in need.”